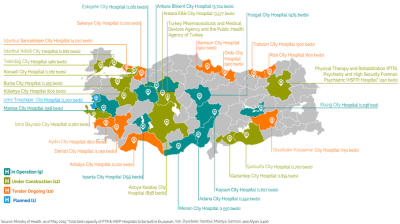 Local conglomerate Turkerler and Italy’s Astaldi, the consortium building the Ankara Etlik City Hospital, has restructured an €833mn loan with a consortium of 15 banks, including the European Bank for Reconstruction and Development (EBRD), the World Bank’s International Finance Corporation (IFC), Credit Agricole, Deutsche Bank and UniCredit, along with local lenders Isbank, Akbank and TSKB, Ernst & Young Turkey said on January 19.

In September, unnamed sources told Reuters that Turkerler and Astaldi were in debt restructuring talks for Ankara Etlik.

In 2015, the consortium obtained a €900mn loan for Etlik from banks, including the EBRD, IFC, UniCredit and Isbank.

The €1.3bn Ankara Etlik project is among the largest public-private-partnership (PPP) hospital projects in Europe, according to E&Y.

In October, Turkerler was also part of a consortium together with Gama Holding and General Electric that restructured a €900mn loan for the Izmir and Kocaeli city hospitals.

The Turkish government has since 2015 entered into the building of 18 city hospitals under the PPP model.

Turkey is to pay $81bn in usage and service fees to the city hospital consortiums over 25 years, according to calculations made by Ugur Emek, the leading professor in Turkey working on identifying what critics see as the country’s PPP blackhole—the government does not share details of the PPP agreements.

Under the model, critics have noted, businessmen affialted to Turkish President Recep Tayyip Erdogan build and operate the hospitals while the government pays them euro-indexed annual fees over 25 years and provides loan guarantees.

Annual payments are higher than the overall construction costs of the hospitals while the facilities are often viewed as too large and impractical for effective operations in medical provision. As part of the programme to deliver new hospitals, in-city hospitals are scrapped, adding to the economic cost of the new hospitals.

Observers note that the contractors behind Turkey’s giant infrastructure voids, along with energy, construction, tourism, airline and retail companies, and a great number of small and medium sized enterprises (SMEs), have all been pulled into debt restructuring spirals since 2016.

In December, Turkish finance minister Lutfi Elvan said problem loans recorded as under close monitoring at Turkish banks had reached TRY382bn ($48.8bn), while there was an additional TRY151bn ($19.3bn) in non-performing loans (NPLs).

On January 12, a report from the banking association TBB showed that reported loan restructurings by Turkish banks, thought to be recorded as under close monitoring, amounted to TRY193.5bn worth of loans from 2018 to September 2020.

The outstanding loan volume under the state’s Credit Guarantee Fund (KGF) stood at TRY342.7bn at end-September.

According to the latest official data from the banking watchdog BDDK, the loan volume of Turkey’s banks stood at TRY3.56 trillion as of January 18, with TRY152bn worth of NPLs and an NPL ratio of 4.27%.

The figure is expected to extend into the 20%s in 2021 as Turkey’s loan volume has lately gone into decline.

The overall equity of the Turkish banking industry rose to TRY588bn at end-November from TRY573bn at end-October.

Fitch expects Ukraine to receive only one disbursement from IMF, issue more Eurobonds in 2021

International ratings agency Fitch says that it expects Ukraine to receive only one disbursement of $700mn this year under its $5bn ... more