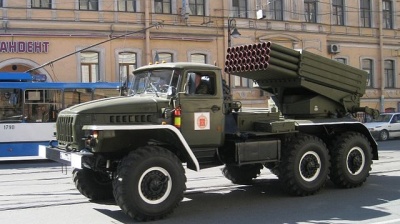 A Grad rocket launcher on display in Russia. Azerbaijan is (indirectly) accusing Georgia of letting a shipment of the weapons, destined for Armenia, to transit its territory.
By Giorgi Lomsadze for Eurasianet July 20, 2020

A perilous flare-up in the conflict between Azerbaijan and Armenia could have implications for Georgia, the third country of the South Caucasus, which generally tries to maintain friendly relations with both its feuding neighbors.

After a little more than a week of deadly fighting with Armenia, Azerbaijan has turned its attention to Georgia, accusing the country of letting shipments of arms destined for Armenia to transit its territory. The weapons – reportedly rocket launchers and trucks – were allegedly used by Armenia to shell Azerbaijan’s western region of Tovuz.

Baku didn’t make the accusation openly, instead communicating its vexation with Georgia via government-controlled media, as it often does as a prelude to or substitute for an official communication. Haqqin.az, a news website tied to the Azerbaijani security services, wrote that the alleged shipment was a stab in the back from Georgia; the two countries generally regard each other as strategic economic and political partners.

“How could Georgia allow the transit of military supplies that were obviously meant to be used against Azerbaijan?” Haqqin asked rhetorically.

Baku’s ire was mainly directed at Serbia, which supplied the Russian-produced Grad rocket launchers. But it also was irked at Russia for supplying trucks for mounting the launchers and at Georgia for allowing the whole shipment to pass through its territory. “Did Tbilisi not just put a ban on transit of military supplies to Armenia several years ago? Why was an exception made for Serbia?” Haqqin asked.

Azerbaijan’s Foreign Ministry summoned Serbia’s diplomatic representative on July 20, demanding an explanation, but has not yet taken any formal diplomatic steps against Georgia or Russia. But, if the allegations prove true, Georgia stands to lose most by alienating Azerbaijan, one of its top investors and energy suppliers.

The allegations thus touched off a domestic political exchange in Georgia, with opposition parties demanding the government provide an explanation. “We know that Russia’s policy of destabilising the region is partly based on supplying arms to both Armenia and Azerbaijan,” said Salome Samadashvili, of United National Movement (UNM), the largest opposition group. “As for Georgia, we have an international obligation not to allow transit of arms across our territory.”

Gia Volski, the deputy speaker of parliament and a senior member of the ruling Georgian Dream party, dismissed the report as nothing but gossip. “There are several media outlets – both in Azerbaijan and Georgia – that unfortunately picked up this rumour,” Volski said.

Armenia and Azerbaijan have blamed one another for instigating this round of the conflict, the deadliest fighting between the two sides since a brief war in 2016.