bneGREEN: Beyond Oil and Gas Alliance aims to end oil and gas production 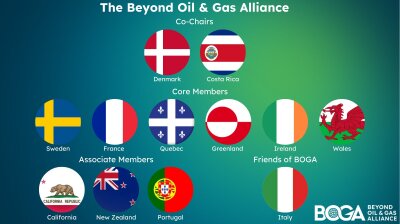 Beyond Oil and Gas Alliance
By Richard Lockhart in Edinburgh November 11, 2021

The Beyond Oil and Gas Alliance (BOGA) is calling for an immediate end to new licensing rounds for oil and gas exploration, and has signed up 11 governments to a promise to end oil and gas production by Paris Agreement-aligned date.

The initiative, which is led by the Danish and Costa Rican governments and was launched at COP26 in Glasgow on November 11, has called for “bold and tangible action, not talk” to move beyond oil and gas.

The alliance is supported by 11 governments and views an end to oil and gas production as a key component of meeting the Paris Agreement’s 1.5-degree target.

“The IPPC has sounded a code red for humanity, because there is no future for oil and gas in a 1.5-degree world,” said Danish Minister for Climate, Energy and Utilities Dan Jorgensen “The fossil era must come to an end.”

The alliance is the first state-led initative to bring the phasing out of oil and gas production into the international area.

Denmark is taking the lead by setting 2050 as the date for the end of oil and gas production, and has committed to ceasing immediately all oil and gas licensing.

"Our goal is not small, our ambition is not modest. We hope that today will mark the beginning of the end of oil and gas," said Jorgensen. “The science has spoken and the time for O&G has run out,” he said.

The other also countries have current or potential oil and gas reserves, and are taking the lead in promising to keep the hydrocarbons in the ground.

The body features countries that have committed to ending oil and gas production by a certain date. Governments and sub-national governments can also support the movement without setting an end-date for oil and gas.

Jorgensen said the group hopes to unveil new members in the coming day, and will be able to start a major conversation on ending oil and gas and to develop new strategies to pursue a just energy transition.

It also aims to increase the political pressure on oil and gas producing countries to work towards aligning their energy strategies with the Paris Agreement goals.

“Last week’s flurry of announcements created a lot of headlines, but initiatives like the Beyond Oil and Gas Alliance show what real climate leadership looks like. If we want to keep global heating below 1.5 degrees, a managed decline of fossil fuel production is the only way. This alliance is a great first step to start that process," said May Boeve, executive director of 350.org

The group’s aims follow the conclusions of the International Energy Agency (IAE), which said recently that there can be no new investment in new fossil fuel production projects if the world is to meet the 1.5-degree target.

To achieve this, the world must achieve net zero by 2050, a goal that is “narrow but still achievable,” the IEA said. To reach this target, no further upstream projects are needed beyond those already approved.

Nazarbayev ousted from power, search for Kazakhstan’s vanished ‘Leader of the Nation’ centres on Switzerland, Russia and China

bneGREEN: NDCs need to be rapidly improved to get near 1.5°C target
Nazarbayev ousted from power, search for Kazakhstan’s vanished ‘Leader of the Nation’ centres on Switzerland, Russia and China
Mongolian traders in disarray as China’s zero-Covid policy chokes business

Commission says there is a role for natural gas and nuclear as a means to facilitate the transition towards a predominantly renewable-based future.