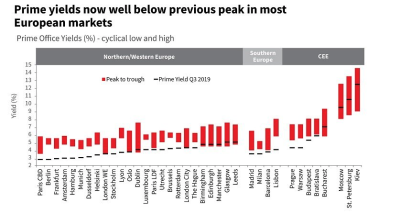 Moscow office yields are set to perform the rest of Europe
By Tim Millard in Moscow of JLL November 22, 2019

I was recently asked by a bank to support my projections for the future path of commercial property yields in Russia and I am sharing the results of that research more broadly.

Throughout Europe property yields are at historic lows (yields move inversely to prices) and are significantly below the levels reached during the previous property cycles. This is illustrated in the figures for offices and warehouses. 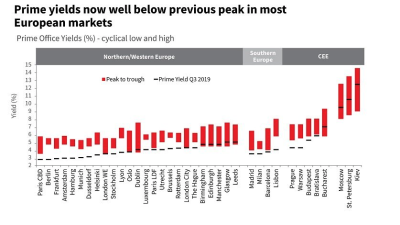 In an era of cheap money property yields have been driven down more or less across the board. The significant outlier is the Russian market. Not only were cap rates in the last cycle significantly higher than all other European markets, Moscow is pretty much the only major market where yields have not surpassed their previous cyclical low. To put this in context, Moscow is traditionally in the top 5 investment markets in Europe.

I suspect that many of the reasons for the recent past performance of Russian property yields are well understood but, for me at least, it is far more interesting to draw some conclusions as to where they are likely to go over the next 5 years or so. 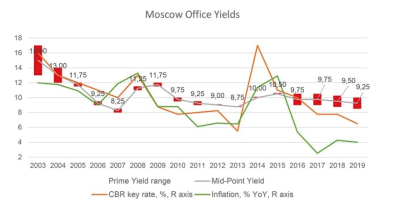 The chart above shows the performance of office yields since 2003 together with the Central Bank of Russia policy rate and inflation. Now, prior to at least 2015 office rents and values were denominated primarily in US Dollars and the policy rate and inflation refer to Russian rubles. Nevertheless, up until 2013 there was a strong correlation between property yields and these 2 metrics. This relationship has been suspended from 2014, partly because the market was switching predominantly to rubles, but mostly because the investment markets have been dominated more by sentiment than fundamentals.

With inflation now low and stable, and the ruble exchange rate also stable, the Central Bank of Russia (CBR) will continue to cut its policy rate, in line with global trends. This will reduce the cost of borrowing further and Russian commercial property will look like better and better value.

It is highly likely therefore that Moscow (and other Russian cities) will follow the experience of other European cities and that yields will surpass the levels reached in the previous cyclical peak. That was all the way back in 2007 when the mid-point for yields was 8.25% for offices. Taking into account, all factors, it is perfectly reasonable to project that Moscow office yields will reach 7-7.5% during this cycle and that is likely to be within the next 2 to 4 years. Indeed, JLL’s house view is that Moscow, perhaps more than any city in the world, is poised for significant growth in the capital values of offices. 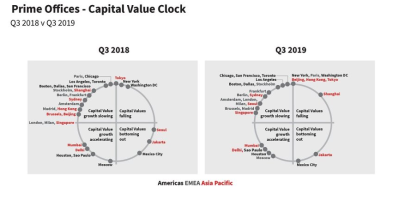 For warehouses there is likely to be even greater movement. Globally warehouse yields have converged with those for offices as the attractiveness of the asset class continues to grow driven primarily by the switch to online retailing. This tendency has not yet been observed in Russia with yields still around 2 ppt higher than those for offices. 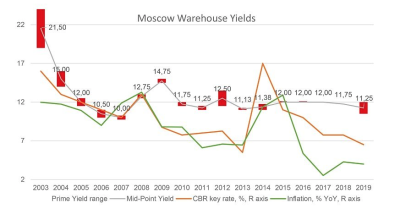 However – expect the global trend to take hold in Russia and therefore for yields to reach around 7.25% to 7.75% (yes – really!) over the same timescale.

Of course, I have not said anything yet about retail… which is a little bit harder to predict. On the one hand, globally shopping centres are under pressure as an asset class, also because of the rise in online retail. On the other hand, retail in Russia is still underdeveloped compared with more mature markets and is also consumed differently than many other places due to culture and climate. There is much more emphasis on entertainment and food than elsewhere. Retail will continue to be an attractive proposition in Russia, and I would expect yields to track those for warehouses.

I have said it before, I will say it again – It’s a great time to buy in Russia.