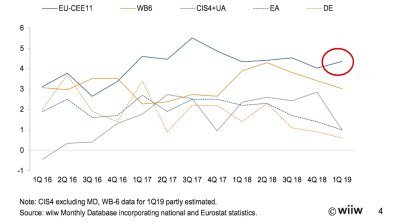 Economists from wiiw have revised upwards their forecasts for Central and Southeast European economies as wage-driven growth has stopped them from following the Eurozone into a slowdown.

Previously, analysts had been predicting a cooling off of growth in the Central and Southeast Europe region, caused by the global cooling of GDP growth, which has already been observed in the Eurozone. With many of the region’s economies closely linked to Eurozone countries — in particular Germany — as their main export markets, they were expected to follow.

But while there has been a cooling down in some places, it is much less than wiiw expected in spring, leading to an upgrade of forecasts for this year, wiiw economists said in a webinar on July 4. For many countries, the upward revisions in growth forecasts have been "positive and strong”, following surprisingly strong results in 1Q19, they said.

“Growth rates in Germany and the euro area have decelerated from 2Q18, but on the other hand in the EU CEE countries growth performance been relatively stable and there has even been a slight upturn in 1Q19,” said wiiw economist Vasily Astrov.

“This is very remarkable — it shows that growth performance has decoupled to some extent from growth in the euro area and Germany. This is not intuitive because most countries in CEE are small, open economies strongly integrated with euro area and Germany in particular.”

Tightening labour markets have raised concerns about future growth in Central Europe, as working age populations decline and unemployment rates plummet to levels not seen since the fall of communism. However, wiiw points to a “virtuous circle of rising wages and investments” that is has been observing for a few years, as struggles to secure enough workers leads firms to invest instead into automation and robotisation.

Since companies are still improving their sales prospects thanks to the growth in private consumption, they also invest more — which increases labour productivity, more growth in ages

On the other hand, wiiw warns, while for a long time nominal wage growth has been largely decoupled from inflation, which remained low, now “to some extent this continuous growth in wages is starting to translate into increasing price pressure,” says Astrov.

He reports signs of overheating as some of the wage growth spills over into increasing prices in Bulgaria, Hungary, Poland and Romania.

“Romania is the only country where we think there is real cause for concern as far as overheating is concerned,” he says, referring to the high and expanding current account deficit, and issues with external competitiveness.

The exceptions to the generally more positive picture across the region include Russia, Serbia and Turkey, all of which were given downward revisions for country-specific reasons: “mainly the result of lower oil prices and a very restrictive fiscal policy designed to ensure the economy’s resilience to Western sanctions,” says the report, while Serbia has been damaged by the 100% import tariffs imposed by Kosovo on Serbian products and issues at Fiat-Chrysler, one of Serbia’s top exporters. Turkey, meanwhile, has plunged into a deeper than expected crisis, though wiiw forecasts it will start to recover by 2020.