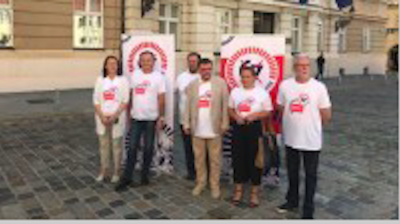 The leaders of three Croatian trade union federations appealed to parliament on September 16 to call a referendum on halting the ongoing pension reforms.

Unions mobilised last year against the plans to increase the retirement age from the current 65 years to 67, launching a campaign titled “67 is too much”.

They managed to collect just under 750,000 signatures in support of a referendum in two weeks, of which over 700,000 were declared valid by the government; Croatia had a population of almost 4.1mn as of 2018.

It is now up to the parliament to decide whether to call a referendum, or to refer the matter to the Constitutional Court.

Gathered outside the parliament on September 16, union leaders told journalists that unless the parliament calls a referendum they will bring citizens out on the streets.

“There must be a referendum, because the will of the citizens must be respected. The MPs have entered the Croatian parliament with the will of the citizens, and if they do not want to respect it, it is our duty to invite citizens to the streets to say what they think of such a government and parliament,” said the president of the Union of Independent Trade Unions of Croatia (SSSH) Mladen Novosel, according to a statement on the SSSH website.

“There is only one message at the moment: schedule a referendum as soon as possible,” added Kresimir Sever, president of the Independent Croatian Trade Unions (NHS).

Croatia’s Labour and Pension System Minister Josip Aladrovic responded later in the day, saying he did not see any reason to take to the streets, and that the issue would be discussed by the parliament, state news agency Hina reported.

Croatian MPs voted on May 18 to dissolve Parliament to make way for a general election to take place in June or July.  It was previously unclear whether Croatia would be able to hold a ... more

Croatia heading for general election in June or July

The Croatian parliament will be dissolved on May 18 to pave the way for a general election at the end of June or the beginning of July, Prime Minister Andrej Plenkovic told journalists after a ... more