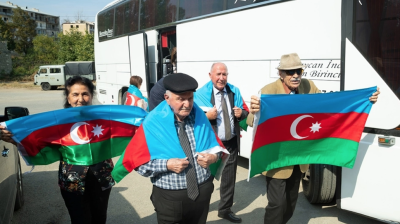 Azerbaijani pensioners on a state-organised tour to Karabakh. / Azerbaijan Ministry of Labor and Social Protection
By Heydar Isayev of Eurasianet October 6, 2022

Sardar Zeynalov was 12 years old when he and his family were forced to flee their home in the village of Seyidli, just outside the city of Aghdam. Armenian forces took the territory in 1993 in the first war between Armenia and Azerbaijan, displacing the Zeynalovs and hundreds of thousands of other Azerbaijanis from their homes.

The family settled in Barda, a city just 50 kilometres away, on the edge of the territory that Azerbaijan controlled after that war ended. Barda became a centre of internally displaced people; roughly half the current residents are IDPs from Karabakh.

Now, following the second war between the two sides, they are finally able to contemplate returning to their homes.

But for many of them, there are mixed feelings. An initial wave of elation about the long-awaited return has subsided two years after the war. As the IDPs have watched the resettlement process unfold, much of what they are seeing gives them pause.

Zeynalov, now 41 and with his own family, says he is looking forward to seeing the place where he spent his childhood, even if it has been destroyed.

Before the war, many of the people in Aghdam lived in houses with yards. But the city was destroyed so thoroughly – journalist Thomas de Waal, who visited the ruined city in 2000, called it the “Hiroshima of the South Caucasus” – that it now must be rebuilt from the ground up.

But the plans that the government has announced so far indicate a far different Aghdam than existed before the war.

A master plan for the city’s reconstruction foresees it growing to twice the size of the pre-war Aghdam. The plan envisages a population of 100,000 people (compared to 36,000 before the war, though the physical area of the city also has been expanded to include some surrounding villages). “This city, and the whole district, will be exemplary for the world,” President Ilham Aliyev said during a May 2021 visit to the city during which he inspected the plan. During an October 5 visit to Aghdam, Aliyev laid several foundation stones and said IDPs would return “as soon as possible.”

One detail in the plan that stood out to Zeynalov: It calls for 23,000 apartments and just 1,750 detached houses.

“It looks like the government intends to build a lot of apartment buildings alongside a few traditional houses with backyards,” Zeynalov told Eurasianet. “It’s the same thing that happened when IDPs were provided temporary accommodation in Barda and other places, they had yards in Karabakh but then had to live in apartments.”

That concern is common among many IDPs, said Asaf Guliyev, a journalist who also was displaced from Aghdam. “They need to make a living from their land, be it with chickens or a few cows or sheep,” he said. “If a villager can’t have eggs from his own chickens, milk and cheese from his own cows, then what’s the point?” He pointed out that in pre-war Aghdam there were roughly 15,000 detached houses, nearly 10 times the number planned for the reconstruction.

While Zeynalov is worried about having to live in an apartment rather than a house, he still is optimistic about the plan. “It’s 100 percent better than the Aghdam we knew,” he said.

Almost immediately following the 2020 war, in which Azerbaijan regained control of about three-quarters of the territory it had lost to Armenia in the first war, the government launched its ambitious reconstruction plan, which it has branded “The Great Return.”

So far the rebuilding efforts have included the longest tunnel in the post-Soviet world, three international airports, and multiple highways. It has begun to set up “smart villages,” a new global development trend that seeks to use technologies like digital connectivity, automation and renewable energy to build thriving rural communities.

Thus far, though, there has been next to no repopulation of the territories. Construction of the flagship smart village, Aghali in the Zangilan district, was repeatedly delayed due to labour disputes. Finally, in July, the first residents of Aghali moved back. About 200 people moved then, and in September they were joined by another 12 families.

As they await their chance to go back home, the concern for most would-be returnees is jobs.

Shortly following the war, the government conducted a large survey among IDPs about the “Great Return,” and one of the questions was what they would like to do once they are resettled. ADA University, which conducted the poll, announced in 2021 that the survey had been finished and sent to the government. The results have yet to be disclosed to the public.

“When they called us for a survey, they were asking, say, ‘what do you do for a living?’ You would say, for example, ‘I’m a teacher,’ and they would tell you ‘we took note of that, and we’ll tell the relevant authorities to keep a spot for you in the schools’ in the liberated territories,” Zeynalov said.

But most of the IDPs don’t have state jobs, Zeynalov said. The typical profile of an IDP is that they were a farmer in Karabakh and then had to switch to some kind of trade when they were resettled in cities after the war. “Now, when these people resettle in their homeland, they will want to farm again. The problem is that no one is explaining how farmland in Karabakh will be provisioned, whether they will have work or not.”

Most IDPs say they are less interested in smart villages than in resuming the lives they used to live in Karabakh, when they would supplement their work on state-run collective farms with their own produce from their kitchen gardens.

“They want to know that they will have farmland,” Zeynalov said. “They ask, ‘why do we need smart villages?’” The Azerbaijani government heavily promotes agriculture in other parts of Azerbaijan, and the IDPs he talks to say they just want the same in Karabakh. “Some even go further and say that it’s enough if the state gives me compensation [for their houses that were destroyed in the war] and clears my land of landmines, and I’ll build my own house and farm.”

While the government has surveyed IDPs, it has so far exhibited little responsiveness to their feedback. Natives of Shusha, the city that has been the focus so far of the government’s reconstruction efforts, have publicly complained that they weren’t consulted.

“The government adopted a law on the status of Shusha and declared [part of] Shusha a cultural park. But it didn’t ask for opinions from natives of Shusha,” Zeynalov said. “It looks like the same thing is going to happen [in Aghdam] now.”

The authorities have been working on a comprehensive Law on the Great Return to regulate all aspects of the reconstruction and resettlement, though they have been vague on what exactly it would cover. On September 21, one member of parliament, Zahid Oruj, announced that the bill was ready and presented it to the Speaker of Parliament.

It had been worked on by 170 officials from many state bodies and members of parliament, and was overseen by the presidential administration, Oruj told Eurasianet in an interview. The bill is still awaiting feedback from other state agencies and the public, he said.

“In other parts of the world there have been only theoretical discussions on how to manage resettlement, but Azerbaijan perhaps is the first country to establish a legislative framework for it,” Oruj said.

Will it address the types of homes people will live in? This “needs to be part of a broad discussion, dialogue and regular interactions with these communities,” he said. He suggested that one possibility would be giving people cash benefits and letting them use the money to build their own homes or farms.

“UNHCR is providing policy advice to the government and works in liaison with the targeted communities, relevant state bodies, civil society organisations and other UN agencies to ensure a safe and voluntary return after almost 30 years of displacement,” the agency told Eurasianet in a response to a query about their role.

Zeynalov remains sceptical that the IDPs will have much say if the government comes up with a plan they don’t like. “The government has its own levers of pressure, like the ability to terminate privileges to IDPs,” he said. “These mean a lot to IDPs who don’t have regular jobs. It’s like depriving them of oxygen. This is how the government is going to carry out the resettlement process.”