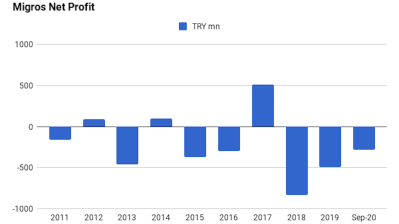 UK-based private equity fund BC Partners on January 26 sold its 11.77% stake in Istanbul-listed retailer Migros (MGROS) for Turkish lira (TRY) 44.15 per share, making for a sale transaction of TRY941mn ($128mn) for 21.3mn shares, BC unit Kenan said on January 26 in a stock exchange filing.

Goldman’s stake in Migros has thus risen to 6.58% from 0.38%. The company had to inform public disclosure platform KAP of the purchase because it took its stake beyond the 5% threshold.

Goldman also noted that it bought shares on behalf of clients, meaning its stake woud soon fall below 5%.

On January 20, the Migros share price jumped after Kenan announced its upcoming transaction.

Migros is popular among foreign investors but the company has faced losses and carries significant debt. Its net FX deficit declined to TRY505mn at end-September from TRY2.16bn at end-2019.

Migros will release its Q4 financials on March 1.

The company has TRY1bn of outstanding domestic bonds that mature in July.

Migros, established in 1954 by the Swiss Migros Cooperatives Union and Istanbul Municipality, was sold to Koc Holding in 1975.

Koc sold the company to Japan’s Moonlight Capital in 2008 and Anadolu Group took control of it in 2015.

On January 7, Migros signed an agreement with Carrefoursa (CRFSA) to take over the tenancy rights and lease agreements on 34 Carrefoursa stores.

Migros is active on the online grocery delivery market with Migros Sanal Market.

On November 19, London-listed asset manager Ninety One said it had increased its stake in Migros to 5.03%.

A total of 39% of Migros is on free-float on the Borsa Istanbul.

Fitch expects Ukraine to receive only one disbursement from IMF, issue more Eurobonds in 2021

International ratings agency Fitch says that it expects Ukraine to receive only one disbursement of $700mn this year under its $5bn ... more