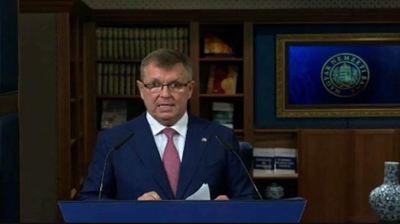 The Monetary Council of the Hungarian National Bank (MNB) reduced the base rate by 15bp to 0.75% at a monthly policy meeting on June 23, marking the first rate cut since 2016.

The central bank's goal is to stimulate the economy, which is facing its worst crisis since 2008, benefit from disinflationary trends and the easing of volatility on global markets, analysts commented. The forint weakened on the news.

The MNB's rate-setting monetary council said in a statement that the move was a "fine-tuning measure" that "supports the maintenance of price stability and the recovery of economic growth". Central bank governor Gyorgy Matolcsy said this does not mark the beginning of a rate-cutting cycle.

The statement came as the bank released its quarterly inflation report in which it lifted the inflation forecast for 2020 and lowered its GDP growth estimate.

The central bank still sees growth of 0.3-2% this year, compared to an earlier estimate of 2-3%, which seems outrageously bullish to some analysts. Most analysts predict Hungary's GDP will contract by 4-5% this year after the pandemic hit key economic sectors like automotive production and tourism. The government forecasts a 3% decline.

The Monetary Council said strong disinflationary effects have appeared in the Hungarian economy due to the weaker external inflation environment and more muted domestic demand.

Following a temporary rise at the beginning of 2020, headline CPI quickly returned into the central bank's tolerance band before declining to its lower bound.

The central bank had to make decisions for the economy to take the expected jumpstart from Q3, MNB governor Gyorgy Matolcsy said at an online press conference after the decision. After a 2.2% growth in Q1 the Hungarian economy could have contracted by 7% y/y in the following quarter, Matolcsy said, explaining the base rate cut.

The aim is to make the business environment even more supportive, he said, adding that the MNB intended to signal to markets and central banks that it sees the base rate as important and that it has room for manoeuvre, he added.

Among the MNB's main goals, price stability, and the stability of the financial system has been preserved, and the third is to support the government's economic policy, he noted.

Investments are crucial for growth to start in Q3, so it is essential to keep the Hungarian investment rate at the 28-29% level it reached in the past years, said deputy governor Mihaly Patai.

The MNB is in the process of rethinking its bond purchase programme and its funding for growth scheme (NHP) to make them even more effective.

The MNB recently amended both programmes to improve access to fight the economic effects of the pandemic. Companies signed up for more than HUF100bn (€286mn) of low-interest loans. The MNB expects a dozen companies to issue bonds in excess of HUF200bn combined in Q3.

In related news, Marton Nagy, who surprisingly resigned from his post as deputy governor of the MNB on May 28, is set to become economic adviser to the prime minister, local media reported.

The forint traded at 350.6 to the euro after the decision was announced, softening from 348.7.