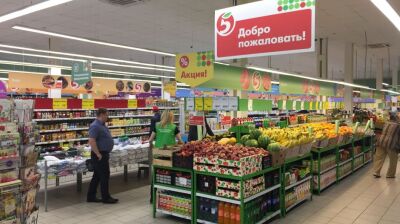 The Russian government's efforts to control price rises using administrative means has largely failed. Now the Prime Minister is blaming businesses' greed for the upward spiral in costs.
By FPRI BMB Russia May 16, 2021

Months of export quotas and price controls haven’t worked to reduce inflation meaningfully in Russia, which stood at 5.5% in April. So the government is upping the pressure. In his annual address to the Duma on Wednesday, PM Mikhail Mishustin placed the blame for rising prices squarely on companies. “It is important to note one reason why prices are rising is greed. The greed of individual producers and retail chains,” he said. “I want to remind them that the government has enough instruments to curb the appetites of those who are seeking to profit from the hype.”

Now Mishustin’s explanation is not exactly macroeconomic orthodoxy. Most economists agree that today’s rising prices are due to a mismatch in supply, which was disrupted during the coronavirus (COVID-19) pandemic, and demand, which is recovering ahead of supply. Inflation is not a Russia-exclusive phenomenon right now. According to the UN Food and Agriculture Organisation (FAO), April experienced the highest annual growth in food prices, at 30.8%, in six years. Meanwhile, a semiconductor shortage is causing price growth in cars, appliances and other items requiring computing power. Indeed, just this week US inflation surprised to the upside with 4.2% year-on-year growth.

Why, then, is the Russian government so concerned about price growth if it’s a global phenomenon? The Moscow Times does a great job explaining the political calculus behind the government’s fixation on prices. The gist is that inflation is eating away at Russians’ already-declining incomes, and that’s not what you want in an election year. Notably, Russians think the inflation problem is even worse than it actually is. While households are notoriously bad at predicting price growth, Russians believe inflation is almost triple its actual level at 14.5%.

Other than the heavy-handed (and arguably ineffective) price controls and export duties, the government’s main mechanism to tamp down on price growth is via interest rate hikes. But doing so risks choking economic growth, so the situation feels like a lose-lose. As a result, putting pressure on “greedy” businesses to hold prices has become the government’s political and economic strategy.

One key grocery retailer is following suit: Lenta, has asked producers of socially important food items (defined by the government as meat, fish, oil, milk, sugar, salt, tea, bread, cereals, pasta and potatoes) not to raise prices until at least the end of September. Lenta told suppliers that given the government’s concern about food inflation, it will need to inform the authorities of any requests to increase prices. Suppliers are understandably displeased about the letter. One supplier told Kommersant that he believes Lenta is abusing its dominant position in the market. (Lenta owns 254 megamarkets and 139 supermarkets). The grocery chain isn’t distinguishing between a 1-2% increase in prices and a 10% increase, the supplier lamented, and he thinks some producers will insist on price changes, or otherwise have to stop selling to Lenta.

Sea snot is the perfect metaphor for the Erdogan regime. That was my first thought when I saw the visually arresting images of the Sea of Marmara enveloped in a suffocating gunk.

MITTELEUROPEAN INSIGHTS: EU and Austria – what is your stance on the Belarus sanctions?

In the end, the EU has agreed to comprehensive economic sanctions against Belarus. Sectoral EU sanctions are to be revealed and likely adopted by the EU on 24-25 June and reportedly include sanctions on potash and mineral fuel exports and finance.

Joe Biden is the fifth American president to hold a bilateral summit with Vladimir Putin. But he is likely the first post-Cold War US president to have a realistic understanding of what Russia is and what it wants.

It's the anniversary of Operation Barbarossa on June 22, when Hitler launched his surprise invasion of the Soviet Union, completely catching Stalin unawares. The ultimate victory over the Nazis has become a centre-piece of Putin's Russia.

RIMMER: Sea snot as metaphor
15 hours ago
Amid Afghanistan pullout observers ask if there's a place for a US military base in Central Asia
21 hours ago
MITTELEUROPEAN INSIGHTS: EU and Austria – what is your stance on the Belarus sanctions?
1 day ago
ECFR: Biden meets Putin: America, Russia, and the return of diplomacy
5 days ago
RIMMER: Unhappy anniversary: Operation Barbarossa
9 days ago