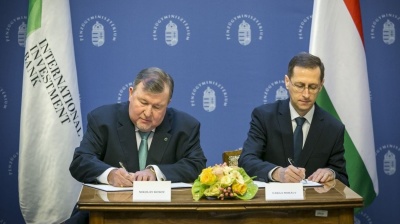 The International Investment Bank (IIB) increased its loan portfolio by 11% or by €98mn in the six months since relocating its headquarters to Budapest, chairman Nikolai Kosov said at a press conference in Budapest on November 26.

Of the 21 projects evaluated in the autumn, 19 were approved for a total value of €373mn. The IIB, with nine shareholders including Hungary, expects that investments will be made in all member states in the coming period. The key sectors include infrastructure, energy, automotive, pharmaceutical, agriculture, food and tourism. IIB focuses primarily on financing small and medium-sized projects.

The relocation of the headquarters allowed IIB to expand its investor base, which includes 170 entities from pension funds, banks and insurance companies from Austria, Bulgaria, Croatia, the Czech Republic, Germany, Hungary, Moldova, the Netherlands, Romania, Russia and the UK.

After the IIB moved to Hungary, it successfully issued bonds in Hungary, Romania and the Czech Republic to the tune of €275mn, which is about 30% of the total long-term funds received by the bank since 2014, when its issued its first bonds, Kosov added.

The bank said that it observed a sharp decrease in the cost and an increase in the maturity of short-term borrowings thanks to favourable yields at bond issues.

"This fall, IIB actively held high-level meetings with leading financial institutions of Hungary, where spheres and instruments of cooperation were discussed. These negotiations allow us to state a clearly positive reaction of the Hungarian business community to the bank’s move to Europe, as it is directly interested in the growing importance of Budapest as an international financial centre," underlined Kosov.

The activities of IIB, the only international development bank with headquarters in the Central and Eastern Europe region, contribute to this in every way, he added.