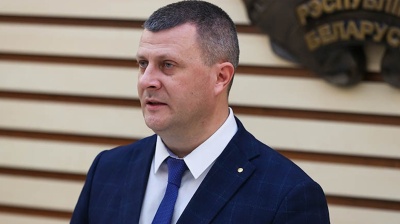 Belarus' Minister of Finance Yuri Seliverstov as he explained the reason for the adoption of the decree. / https://eng.belta.by
By bne IntelliNews June 30, 2022

Belarus' Council of Ministers along with the National Bank of the Republic of Belarus (NBRB) have adopted a decree on settling Belarus' Eurobond payments in Belarusian rubles, State Belarusian News Service BelTA reported on June 29.

An official statement from the Belarusian government's press service read: “Debt obligations under sovereign securities floated on international financial markets will be honoured in Belarusian rubles at the rate of the country's National Bank as of the date of payment."

According to Belarus' Finance Minister Yuri Seliverstov, the decision comes as Belarus has had a hard time paying its debts through international clearing and depository systems.

The problems first arose when Belarus was due to make its last interest payment in February, for which the entire payment was made in US dollars to Citibank.

However, after receiving numerous complaints about not having received the payments. Citibank confirmed that all the payments had been made but referred the Belarusian finance ministry to international clearing and depository systems.

The depository and international clearing systems refused to discuss the matter with the Belarusian finance ministry, citing sanctions against Belarusian banks or the Russian banks that serviced them as the reason.

Seliverstov concluded that there was therefore no reason for Belarus to make payments in US dollars, as they will be stopped at some point and won't even reach "friendly" investors such as Russian ones.

Since the West excluded all Belarusian and Russian banks from SWIFT, there has been much speculation about possible difficulties for Belarus to settle its debt with foreign investors.

Already in April, Belarus announced that it would pay foreign debts in Belarusian rubles. With Seliverstov's recent statement it's clear that this announcement came as complaints from foreign debtors kept rolling in, and that the decree and its various necessary administrative changes must have been under development for some time.

Belarus has found a way to pay its foreign debts, but the next question is whether it will have the money to do so, considering the harsh sanctions on its export sector.

The new way of servicing its foreign debt in Belarusian rubles will be made through transfers from Belarus' finance ministry to accounts in sanctioned Belarusbank, and Citibank has been granted the right of paying agent that's able to access this money.

In his statement on the matter, Seliverstov was notably irritated with the international clearing systems "freeing themselves from any liability and responsibility citing the sanctions as the reason."

Now, Belarus' finance ministry is putting the ball in the Western banks' court by making Citibank access the payments through the sanctioned Belarusbank.

One way or another, Citibank will probably manage to get hold of the payments and send them to the debtors. What Belarus finance ministry is probably worried about, although it hasn't said this, is that this headache is going to make many investors withdraw from Belarus in the future.