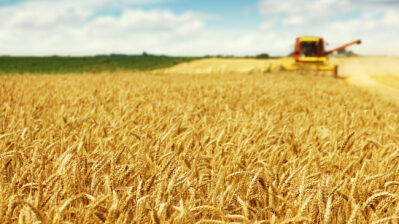 The war in Ukraine has interrupted grain exports from the country and could create a global food crisis as vulnerable wheat importing countries in Africa and the Middle East face shortages and rising prices.

“For the first time in decades there is no usual movement of the merchant fleet, no usual port functioning in Odesa. Probably this has never happened in Odesa since World War Two,” he said after the port of Odesa was hit by Russian missiles on May 9.

“Without our agricultural exports, dozens of countries in different parts of the world are already on the brink of food shortages. And over time, the situation can become downright terrible … This is a direct consequence of Russian aggression, which can be overcome only together – by all Europeans, by the whole free world.”

Meanwhile, Russia itself has halted the export of grain and fertiliser to “unfriendly countries” in response to Western sanctions.

The war is exacerbating more established threats to food security posed by climate change, as rates of deforestation and desertification rise in vulnerable countries in Africa and Asia, often caused by overfarming and intense agriculture.

The war also follows sustained rises in food over the last decade, especially in the last three years.

The FAO cereal price index showed prices hit their previous 2008 high in 2021, and since the invasion they have exploded. Between 2019 and March 2022, cereal prices have increased by 48%, fuel prices by 86% and fertiliser prices by 35%.

The removal of Russian and Ukrainian wheat from world markets has pushed wheat prices to a 14-year peak in March, and maize prices reached the highest ever recorded, the International Panel of Experts on Sustainable Food Systems (IPES) said in a report.

Russia and Ukraine supply about 30% of global wheat exports, but those have collapsed as a result of the conflict.

The report highlighted that the sudden halt to wheat and fertiliser exports from Ukraine, Russia and Belarus, combined with droughts, floods and high temperatures heat fuelled by climate change, are damaging more harvests.

This is pushing up prices and causing food insecurity in some of the world’s most vulnerable countries, pushing up poverty levels and threatening wider development goals such as access to clean water, energy and education.

The war in Ukraine has sparked the third food crisis in 15 years, the report warned.

However, the spike in food prices builds on the more worrying underlying trend of food insecurity. The report warned that the “underlying rigidities, weaknesses and flaws in global food systems” are fanning the flames of global hunger.

Fundamental flaws in global food systems, such as heavy reliance on food imports and excessive commodity speculation, have allowed the Ukraine conflict to become a full-blown global food price crisis, the report concludes.

The UN Food and Agriculture Organisation (FAO) said that the number of undernourished people could increase by 13mn because of the current war-induced crisis.

As such, the report called for more domestic wheat production using less fertiliser, less speculation on the markets and more effort to reduce poorer countries' reliance on wheat imports from distant markets, such as Russia and Ukraine.

Turkey and most of the Middle East and North Africa are dependent on imports of many foods from Russia and Ukraine – especially for cereals and vegetable seeds/oils. Asia, Africa and Central Europe sit somewhere in between, according to Capital Economics.

“We estimate that imports from Russia and Ukraine account for 20-30% of domestic wheat supplies in Turkey, Indonesia and parts of Africa and 40-50% in Egypt, the UAE and Tunisia. Imports of sunflower seeds/oil account for 30% of domestic supplies in Turkey, Poland, China and Korea, 60% in MENA and more than 70% in Tunisia, India and Malaysia. Other vulnerabilities include soybeans (Turkey and Poland), corn (Tunisia) and cocoa products (the UAE),” said Capital Economics’ Liam Peach.

Egypt sources 15% of its needs as imports, but in very large volumes. It has been desperately looking new suppliers in the last month, but without luck, and the authorities say it now only has three months of reserves left.

Efforts to grow more wheat elsewhere replace Russian and Ukraine supplies are being made. India, for example, India has boosted exports of wheat to meet demand.

India exported a record 7.85mn tonnes of wheat in the year to March, up 275% on the previous year, taking advantage of rising wheat prices after Russia invaded Ukraine.

However, the country’s heatwave since mid-March has cut crop yields, the London-based Energy and Climate Intelligence Unit warned.

“Millions of people could be severely affected by the heatwave in India – another sign of the growing human cost of extreme weather. India might have stepped in to fill some of the global gap in wheat production caused by the invasion of Ukraine. But the new normal of extreme weather could put paid to that in India and other places around the world. Climate change will make this far worse in coming years and decades,” said Matt Williams, climate and land programme lead at the Energy and Climate Intelligence Unit (ECIU).

This is a prime example of how food production and indeed food security in the developing world is vulnerable to climate change, a situation that the current war is intensifying.

One irony is that agriculture itself is one contributor to climate change, with 23% of all global greenhouse gases (GHGs) coming from farming, loss of forests, and other land-use changes.

Without changes, emissions from the food system could increase by 30-40% by 2050, reducing the chances of keeping temperature rises to 1.5C, the ECIU said in a briefing.

While contributing significantly to climate change, food production and food supply chains are also at increasing risk from its most damaging impacts, with farmers deemed as one of the most vulnerable groups to climate change.

By 2050 harvests of staple crops in eight countries – Angola, Lesotho, Malawi, Mozambique, Rwanda, Uganda, Zambia and Zimbabwe – could fall by 80% due to climate change, forcing farmers to switch to different types of crop, the International Fund for Agricultural Development (IFAD) warned ahead of COP26 in November 2021.

But efforts to boost production globally have been hampered by shortages of chemical fertiliser. Russia and Belarus produced 40% of international potash exports in 2021 and that trade has also been hit by the war.

Fertiliser are now at their highest since the global commodity bubble in 2008, with the cost of nitrogen fertilisers rising by 253% in Europe in 2021.

This cannot be attributed exclusively to the Ukraine crisis – tensions over Ukraine did not begin to peak until late 2021. But they have continued to climb in proportion to the growing forces amassed on the border.

Rising prices for wheat is also pushing up inflation in many importing countries. The EBRD warned this week that inflation soared to 11.9% in March, the month after the invasion, which is close to the peak recorded during the international financial crisis in late 2008.

“Prices of wheat, corn, soybeans and other agricultural commodities have also risen rapidly,” the EBRD says.

“Many economies in the EBRD regions are highly dependent on gas in their energy mix, while some economies in the Caucasus and southern and eastern Mediterranean rely heavily on wheat imports,” the bank said in its Regional Economic Prospects report.

The EBRD also warned that North Africa was facing major threats to its food supply, as they are the world’s biggest importers of grain.

Egypt is particularly exposed to the Russo-Ukraine war, as it sources 42% of all the calories it imports from Russia and Ukraine. And Egypt and Lebanon import three quarters (75%) of their wheat from Russia or Ukraine.

Alongside Africa, India’s current heatwaves are also threatening food supplies, even though India is a net exporter of wheat.

The war in Ukraine has had a major impact on global food markets, highlighting just how fragile food systems how are how vulnerable some countries are to supply shocks.

Any ways to deal with the crisis, such as developing regional grain reserves, clamping down on excessive grain speculation, debt relief for poorer nation or supporting domestic food production, may deal with underlying trends and will play their part in combating climate change.

But sudden events such as the war in Ukraine show just how vulnerable the global food system is to sudden interruptions.

Sun-drenched Uzbekistan on the verge of a renewables boom

International investors are vying to build new solar and wind farms in Uzbekistan as the country tries to reduce emissions while also supplying power to its growing population.