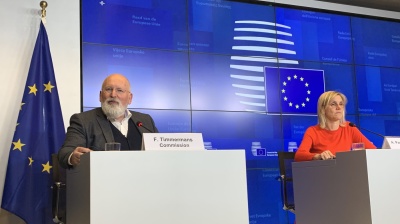 The EU Council of Ministers has agreed to an effective ban on the sale of petrol and diesel cars from 2035, overcoming last-minute opposition from a group of five countries.

EU environment ministers agreed in the early hours of June 29 that new cars sold in the EU would not be able to emit CO2 from 2035, part of a wider package of deals passed by ministers that pave the way for the EU Climate Law to be passed by the European Parliament later in 2022.

Frans Timmermans, European Commission Vice-President for Green Policy, hailed the agreements as “a very good day for the European Green Deal”. The deal was reached “against the odds, against what many thought was possible,” he said.

“Our shift away from fossil fuels is even more urgent after Russia’s invasion of Ukraine.”

Other issues agreed included a phaseout of free EU ETS permits that allow polluting industries a certain amount of carbon emissions, a new carbon market from 2027 to impose CO2 costs on polluting fuels used in transport and buildings, as well as a crackdown on products linked to deforestation. The EU aims to remove 310mn tonnes of CO2 equivalent from the atmosphere by boosting natural carbon sinks such as forests.

The agreement allows the EU to move ahead with tough climate policies, dubbed by Brussels the Green Deal, just as the union is exploring ways to reduce its reliance on Russian fossil fuels.

“What we are asking countries to do is not a punishment, it is something that will help them get rid of a dependency [on] fossil fuels,” said Dan Jørgensen, Denmark’s climate minister.

Indeed, last-minute concessions on petrol and diesel cars were achieved by Italy, Spain, Slovakia, Romania and Bulgaria, which has strongly pushed back on proposals to phase out combustion engines by 2035, lobbying for the later date of 2040.

They finally agreed to a caveat proposed by Germany which called for the Commission to review the contribution of so-called “e-fuels” made from captured carbon dioxide towards reducing emissions. The caveat also includes a review by Brussels on including hybrid vehicles in the emissions cuts, which is currently not the case.

Italy, meanwhile, achieved an exemption for luxury carmakers, who now have to meet interim carbon reduction targets until the end of 2035, instead of 2029 as the Commission had proposed.

Now that the ministers have supported these proposals, they are highly likely to become law, as the European Parliament, which is more pro-green than individual governments, has already passed them. The Commission, Parliament and member states are likely to finalise elements of the Climate Law in autumn 2022.