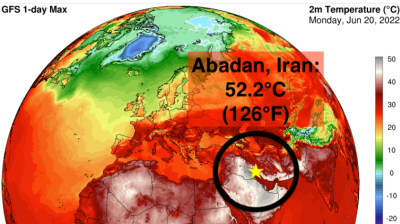 Iran has recorded one of the hottest days since records began.

Amid fears world leaders have decided to take a bit of a break from dealing with a threat that could wipe out the human race – climate change – as they have too much else to be getting on with right now, US Stormwatch was quick to spot the 52.2°C (126°F) recorded by Abadan in south-western Iran on June 20.

It wrote on Twitter: “That's the hottest temperature recorded on Earth this year and one of the highest ‘pre-solstice’ [pre-June 21] temperatures ever recorded.”

The London-based Unilad youth platform for news pointed out that UN Secretary-General Antonio Guterres said in April: "Some government and business leaders are saying one thing, but doing another. Simply put: They are lying. And the results will be catastrophic."

Guterres went on to warn that the planet is “already perilously close to tipping points that could lead to cascading and irreversible climate impacts.”

"But high-emitting governments and corporations are not just turning a blind eye; they are adding fuel to the flames," Guterres continued.

As Abadan registered its staggering 52.2°C, other parts of Iran recorded highs of 50°C (122°F), as shown on AccuWeather.

bne IntelliNews reported on June 21 that more than 50 people were hospitalised amid heatwave temperatures that reached in excess of 51.5°C in Iran’s western city of Dehloran (at the same time, Europeans were griping about temperatures breaching the 40°C mark).

Among social media responses noted by Unilad to the Abadan temperature were:

• "That is truly frightening. Under normal conditions, it says on Google that blood will boil at a little over 212° F."

• "It’s actually the last day of spring according to the Persian Solar calendar. The summer is yet to come!"