BOOK REVIEW: How the handling of migration from the eastern EU states pushed the UK towards Brexit 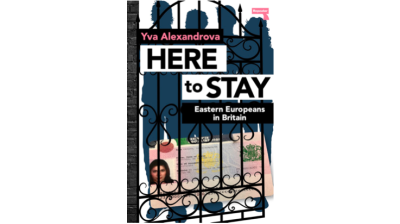 “Here to Stay: Eastern Europeans in Britain” tells the story of the hundreds of thousands of migrants from the new EU member states from Central and Southeast Europe who have moved to the UK in the early 21st century. Author Yva Alexandrova charts the crucial missteps made by British politicians on the left, who might be considered natural supporters of the new working class of Eastern Europeans, that contributed to the vote to leave the European Union in the 2016 referendum.

The book is particularly relevant at the moment, as it was published two months before Russia’s invasion of Ukraine that led to yet another debate over migration from Eastern Europe, this time on letting in Ukrainian refugees – though the sympathy from the British public for refugees from the war-torn country is in stark contrast to attitudes to earlier waves of economic migrants from the region.

Setting the scene, Alexandrova traces the history of migration from Eastern Europe to the UK from the Jews who fled the pogroms in the Russian Empire from the 1880s onward to the citizens of ex-socialist countries who came to the UK after their countries joined the EU. She writes how Eastern Europe is viewed as “Europe but not Europe” and how old views of the region as populated by “barbarians” plus the modern view of post-communist Eastern Europe as “poor and largely powerless” overlaid the enthusiasm for reunification of Europe when the eastern bloc started to disintegrate in 1989.

After states from the region joined the EU in a large wave in 2004, followed by Romania and Bulgaria in 2007 and Croatia in 2013, people from the region started to move to the UK and other West European countries. In all, half a million people arrived in the UK from the eastern EU members in 10 years, and Polish immigrants overtook those from Ireland and India as the most numerous in the country.

Alexandrova spoke to numerous people who had moved to the UK from the region. She found that the commonly held view of the UK as a progressive and tolerant country increasingly contrasted with the lived experiences of those who made it their home, temporarily or permanently.

As well as being an expert on migration, Alexandrova is a Bulgarian citizen who spent many years in the UK, so also writes from personal experience. The author grew up in communist Bulgaria, but spent some time in Britain as a child, and later moved back to live and work in the UK. She also writes from the perspective of a left-wing activist, who is positive about immigration and describes Brexit as an “abomination".

Kept in their place

The author includes numerous examples of the experiences of East European migrants in the UK, which sometimes make for uncomfortable reading because of what they reveal about British prejudice. Typically migrants from the region worked long hours at low-skilled but physically demanding jobs such as fruit and vegetable picking, cleaning and labouring on building sites. She gives one example of a young student who moved to London where she worked three jobs for several months, barely sleeping.

Besides the trivial complaints – sinks having separate hot and cold taps rather than a single mixer tap is a particular bugbear of East Europeans in the UK – is the more serious issue of the racism faced by immigrants. This is not only the blatant racism like physical attacks or the fishery that put up a sign saying “no East Europeans”, but also subtler forms. In particular, several of Alexandrova’s interlocutors said they found it hard to break out of low-skilled jobs, seen as their “place”, into the careers their education and skills had prepared them to do. One successful entrepreneur, a Bulgarian citizen originally from North Macedonia, said that when she told people she was from Eastern Europe their response was like ‘flushing a toilet” on all her experience and career achievements.

“When Eastern Europeans were doing low-skilled jobs they were where they belonged and were therefore accepted,” writes Alexandrova. Meanwhile, those who were “tying to break into a different space” were “continuously questioned about they right to be there” not directly but in subtle ways that made them feel uncomfortable.

From enlargement to Brexit

Attitudes towards East European migrants steadily hardened between the first wave of enlargement to the east in 2004 to the Brexit vote more than 12 years later.  Alexandrova doesn’t stint on her criticism of the British media, especially the tabloids, for their overwhelmingly negative coverage of immigration from Eastern Europe. Immigration from the region was greeted as a “calamity”, creating a “new scapegoat” for the “notoriously poisonous British tabloid media” that had previously targeted other groups including the Windrush generation from the Caribbean, Ugandan Asians, asylum seekers and others.

“An image was firmly established in the minds of Daily Mail readers: Eastern Europeans came in flocks to take their jobs while at the same time did nothing and lived on benefits,” she writes. Rather than try to challenge this sentiment, she argued, “no UK politician saw any other option other than to grovel to the bigots”. This in turn “set the stage for the growing anti-immigrant and anti-European sentiments that led to Brexit”.

The situation worsened with the onset of the international financial crisis and the recession and austerity measures that followed. “Local resentment against immigrants that had been simmering when the economy was growing … with the worries of a recession, erupted onto the national political stage. Immigration was top of concerns in the 2010 elections, and a newly emboldened UKIP was swift in directing the anger against the EU and what it called its one borders,” writes Alexandrova.

Mistakes on the left

Tony Blair’s New Labour was in power at the time of the first wave of engagement of the EU to the east, and was in favour of both enlargement and deeper EU integration. However, Alexandrova argued that as well as underestimating the numbers, New Labour failed to change the narrative about migration.

Alexandrova initially welcomed the election of Jeremy Corbyn as leader of the Labour Party, but became disillusioned with Corbyn and his politics as the Brexit referendum approached. Specifically, she points to the party’s failure to engage with East European migrants, even though most were doing low-wage jobs. She writes of “complete lack of interest on the part of leftist groups which … led to the disastrous result of the Brexit referendum”. She is scathing about supporters of a ‘Lexit’ (left-wing Brexit), arguing that despite being a neoliberal trade bloc, the EU has also been levelling up across Europe with free movement of labour – which should be a left-wing ideal.

And what now for the East European migrants in the UK, some of them having settled almost two decades ago and are bringing up a new generation in the UK? According to Alexandrova’s research, most took the result of the Brexit referendum “on the chin”. As the title of the book indicates, despite the drastic changes of the last few years, many are now here to stay.

‘Here To Stay: Eastern Europeans in Britain’ was published by Repeater Books in December 2021.

The Ukrainian War is no laughing matter, but the Russians are doing their level best to make it funny. Coverage of the war is extensive, but observers have overlooked the comedy inadvertently provided by the Kremlin.

China, India and Iran are pushing the International North-South Transport Corridor, INSTC, as a way to maintain trade relations with Russia.