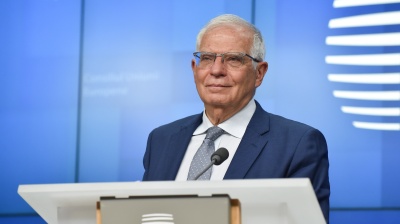 EU High Commissioner Josep Borrell said on May 17 that stepping up EU engagement with the six Western Balkans countries and advancing towards a common European future is more important than ever in view of the Russian attacks on Ukraine.

Borrell made the comment in a tweet following a news conference on May 16 after the meeting of the Foreign Affairs Council in Brussels.

“The foreign ministers of the six Western Balkan joined the EU foreign ministers to discuss the Russian aggression and the European security. We need to tackle the impact of this war together,” Borrell tweeted.

“We expect clear expectations towards the partners as future member states to commit to European values and European foreign policy,” Borrell said at the news conference according to a video posted on his twitter profile.

“Those who have not yet done so and Serbia is one of them should, as soon as they can, step up their alignment and implement sanctions. Maintain close ties with the [Russian President Vladimir] Putin regime is no longer compatible with building a common future with the EU. Being neutral is a false concept,” Borrell said.

He said that due to their decision to align to the EU sanction policy they may be exposed to more threats from Russia.

“Also Bosnia & Herzegovina has aligned to our measures against Russia and also did Kosovo,” he said.

The High Commissioner added that the Western Balkans partners will be also included in the EU financial package aimed at easing the consequences of the war in Ukraine, such as high inflation and energy crisis.

In the meantime, North Macedonia’s news agency MIA reported that regarding the issue with Bulgaria, Borrell said that the dispute should be solved by the end of the French presidency by the end of June, in order for a deep crisis in the relations with the region to be avoided.