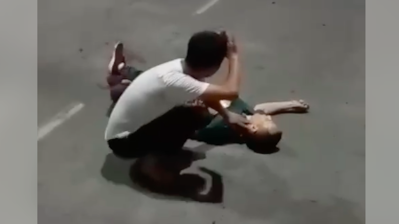 A loose end the Uzbek authorities were looking to tie up turned out to be a powder keg fuse they lit.

The protests and violence that broke out in Uzbekistan’s western autonomous Republic of Karakalpakstan on July 1 came in response to a package of planned changes to the constitution that Uzbek President Shavkat Mirziyoyev says will bring a “Third Renaissance” to his “New Uzbekistan”.

For some people in Karakalpakstan, the proposed amendments on the status of their region stripped them of their last distinction and represented a final humiliation after years of neglect and repression.

After the collapse of the USSR, on January 9, 1992, Karakalpakstan became the Republic of Karakalpakstan and in April 1993 adopted a constitution that acknowledged the region as being part of Uzbekistan but preserved the region’s right to secede through conducting a referendum.

The status as an autonomous republic and the right to secede would have been lost under the proposed amendments to the constitution, and that proved to be the straw that broke the camel’s back.

Karakalpakstan is the poorest area in Uzbekistan. Making up nearly 40% of Uzbekistan’s territory, it is mainly desert.

Its people suffer from a range of health problems associated with the desiccation of the Aral Sea, part of which is located in Karakalpakstan, and the alkaline dust that blows from its dried seabed.

There have been accusations for years that the Uzbek government has been forcibly sterilising some women and that young Karakalpak women were particularly targeted.

Karakalpak activist Bakhtiyar Nietullaev spoke about forced sterilisation of women in Karakalpakstan at the OSCE’s Human Dimension Implementation Meeting in 2019, claiming thousands of women from the region were victims.

Karakalpaks are ethnically and linguistically closer to Kazakhs than Uzbeks. The Karakalpak population in Karakalpakstan is somewhere between 400,000-500,000 out of the region’s total population of nearly 2mn.

Mirziyoyev has paid more attention to the region than his predecessor, Uzbekistan’s first president, Islam Karimov, ever did but employment is still difficult to find and social conditions and infrastructure continue to lag behind the rest of Uzbekistan.

Mirziyoyev also blamed Karakalpakstan’s lawmakers for forwarding the proposed changes to the state commission working on amendments to the constitution.

Further transferring the blame onto local officials, Mirziyoyev asked why he was not told earlier that the move would be unpopular with the people of the region, though Uzbekistan’s security service seems to have known there could be unrest as internet connections to Karakalpakstan were cut on June 27.

It appears Uzbek authorities were uncomfortable with the thought that Karakalpakstan could legally declare independence from Uzbekistan, though this was unlikely to happen.

There have been Karakalpak movements for independence during the years Uzbekistan has been independent, but none ever gained enough momentum to pose a serious threat of seceding.

Karakalpaks do make up only some 25% of the population of Karakalpakstan.

The Karakalpaks of Karakalpakstan must be aware Uzbek authorities will not willing lose nearly 40% of the country’s territory or the natural gas reserves located there.

That did not stop Uzbek security forces from trying to shut down independence movements and many of the leaders of these Karakalpak liberation groups fled Uzbekistan years ago.

The plan to remove the privileges Karakalpakstan enjoys, albeit only on paper, is likely only shelved for now, not scrapped entirely.

Uzbek authorities have now shown they would prefer Karakalpakstan did not have any special status or rights, especially the right to secede.

The security operation to restore order that left at least 18 people dead and 243 injured in Karakalpakstan is a black mark on Mirziyoyev’s government just ahead of another move that calls into question the president’s claim to be a reformer.

One of the most controversial of the proposed changes to the constitution will allow Mirziyoyev to stay as president after the second term in office he is currently serving expires in 2026, by extending the presidential term from five to seven years.

Mirziyoyev has been saying since he came to power in late 2016 that his government is different from the government of his predecessor Karimov, who earned the Uzbek government a reputation as a serial rights abuser.

But Karimov extended the presidential term from five to seven years in a referendum in January 2002, and then stayed on in power until his death in 2016.

The violence in Karakalpakstan appears to be less severe than the violence in Andijon in May 2005 when Uzbek security forces and military moved to crush protests and 189 people, officially, were killed, though scores of witnesses say the figure was several times higher.

But what happened in Karakalpakstan reminds some people of the Andijon massacre and raises more doubts about how new Mirziyoyev’s New Uzbekistan really is.

CENTRAL ASIA BLOG: Why Tajikistan and Turkmenistan said no to a Central Asian ‘Visegrad Group’