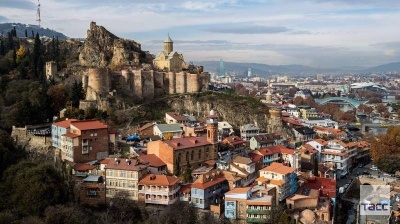 The European Commission has recommended to the Council of the European Union to grant candidate country status to Ukraine and Moldova but not to Georgia.
By Ghia Nodia in Tbilisi June 21, 2022

The European Commission has recommended to the Council of the European Union to grant candidate country status to Ukraine and Moldova but not to Georgia. As a consolation prize, the EC recommended recognising Georgia's European perspective and will consider granting it candidate status later after the country meets several important preconditions.

The European Council is expected to make a final decision on June 23 or 24, but it will hardly be an improvement on this.

For Georgia, this is a serious setback and a psychological shock. In this country, European integration is not considered a foreign policy option: rather, it is a moral and cultural choice shared by all political parties of any consequence and supported by the large majority of its citizens.

During the last few years, Georgia, Moldova, and Ukraine constituted a “Trio” of countries that had association agreements with the EU but aspired for more; Georgia was sometimes seen as the frontrunner among the three. Now, there is no trio anymore – Georgia is relegated to a lower league. It may still catch up in the future, but this particular historical chance that emerged so unexpectedly due to the bravery and perseverance of the Ukrainian people has been wasted.

What happened? The answer is clear: the Georgian Dream (GD) government blew it. GD, widely believed to be guided by Bidzina Ivanishvili, a secretive billionaire who made his fortune in Russia, had never been a paragon of democracy, but during the last two years, its descent in an autocratic direction became more conspicuous, and it's rhetoric towards Georgia’s European partners increasingly hostile.

No less importantly, the government's response to the Russian invasion of Ukraine was equivocal and confusing. Georgia made formal steps to condemn Russian aggression and express its solidarity with Ukraine. However, it also expressed hostility to the Ukrainian government and accused it of conspiring with the Georgian opposition to drag Georgia into the war.

Later, it broadened the scope of the imagined conspiracy, alleging that even Western powers took part in it.  Irakli Kobakhidze, the chairman of the GD, called the European People Party, the largest group in the European Parliament, a “criminal association” because two of Georgia’s opposition parties – the United National Movement and the European Georgia – are its members. After the European Parliament adopted a resolution strongly critical of Georgia, he said he would like Georgia to be a member of the EU, but the latter should have a different kind of parliament.

This made the actions of the Georgian government after it submitted an application for EU membership in March look schizophrenic. Why apply for membership in the organisation and, at the same time, criticise it in such harsh terms? Why simultaneously take steps obviously undermining that same application, like imprisoning Nika Gvaramia, the founder and director of Mtavari Arkhi, the most popular pro-opposition TV channel?

However bizarre, this behavior needs to be explained. Some Georgians believe that Georgian Dream deliberately sabotaged its own application. Against the backdrop of very strong support for as well as solidarity with Ukraine in the face of Russian aggression, the government could not politically afford not to submit an application when Ukraine and Moldova did. However, it also wanted to appease Putin and demonstrate its disagreements with the West and Ukraine – maybe, because it was afraid of becoming the next target of the Russian aggression, or because Ivanishvili’s business interests are still linked to Russia. No wonder, in the last couple of months Russian propagandists have occasionally praised the Georgian Dream government, while almost everybody else criticised it.

But one may opt for simpler explanations. Since approximately 2018, the government feels increasingly insecure as its popularity slips away. However, giving up power is not deemed an acceptable option. The alternative is to intensify harassment and demonisation of the opposition, civil society, and the independent media, manipulate the electoral process, and encourage openly anti-Western nativist forces that are Georgian Dream’s most natural and motivated allies against the opposition. Inevitably, this invites strong criticism from the West. Despite all this, Georgian Dream would still like to take credit for gaining the EU candidate status, but this is not its priority.

Whatever the calculus might be, its behavior is increasingly compared to that of Viktor Yanukovych, the president of Ukraine who was ousted as a result of the so-called Euro-Maidan protests. Before taking a U-turn in November 2013, he also claimed to lead Ukraine towards Europe (at that time, this implied concluding an association agreement with the EU). He complied with the technical conditions set by the EU, but the norms and values of that organisation always remained foreign to him. Likewise, declaratively Georgian Dream continues to pursue the path of European integration. Even now, it reacted to the EC recommendations by claiming credit for getting a general membership perspective. But there is no substance behind this.

Does this mean that Georgian Dream will eventually take the same step as Yanukovych did and openly reject this declarative pro-Europeanness in favor of an openly pro-Russian position? Nothing can be ruled out, but probably not. Ivanishvili came to power by promising to combine pro-Western policies with normalising relations with Russia; this was a popular combination and an important precondition for his political success.

The Russian invasion made it much more difficult to pursue both goals simultaneously, but Georgian Dream appears resolute to stick to this line until the very end. People tend to approve of efforts to avoid a new conflagration with Russia, but expressly opting for the status of Russia’s satellite may create fatal problems for the government. So, it will probably continue its balancing act, however awkward it may look.

The EC decision confirmed what many Georgians had known for a while: with Georgian Dream at the helm, the country is deadlocked – at least, from the perspective of those who want it to be a European-style democracy. A tacit message of the EC recommendation may be formulated as follows: Georgia can become an EU candidate country, but not with Georgian Dream in power. Theoretically, Georgian Dream can still reinvent itself. But hardly anybody believes this to be possible; specific conditions spelled out by the EC are the exact opposite of GD policies so far.

On the other hand, the opposition in its current state does not instill great confidence either. It may be more committed to the European path, but it looks confused, feckless, inconsistent, and fragmented. The next parliamentary elections are expected in 2024: if the Georgian political class and civic society want to achieve some change, they have to get their act together soon.

Ghia Nodia is professor of politics and director of the International School of Caucasus Studies at Ilia State University in Tbilisi.