Does Putin have cancer? 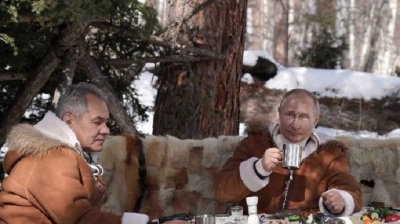 Defence Minister Sergei Shoigu has convinced the President to begin taking baths in deer antler essence, according to a report by investigative journalists at Proekt. / Image: bne IntelliNews.
By bne intellinews April 5, 2022

In spite of the Kremlin’s persistent denials that President Vladimir Putin has ever been afflicted with anything worse than a mild cold, research by Russian investigative collective Proekt suggests that Russia’s president is concerned about his health. Records of the medical professionals present in Putin’s entourage suggest that he may be receiving treatment for thyroid cancer.

Since the beginning of Putin’s third term as president in 2012, Russian TV viewers have become increasingly used to watching “canned footage” of their president – pre-recorded videos showing Putin in meetings. Pre-prepared content likes this can divert attention away from the president’s protracted absence from public view.

This is not the only case of a carefully curated media output apparently aimed at covering up the president’s ill health. On November 4, 2012, footage of Putin laying flowers with Patriarch Kirill of the Russian Orthodox Church did not air publicly. Clips of Putin’s participation in the ceremony could, however, be found on the website of the Moscow Patriarchate, and revealed that the president had a pronounced limp at the time.

This fuelled speculation that the president was suffering from back pain. Three government officials confirmed rumours of Putin’s back troubles to Reuters.

But indications of more serious health problems arise from the report published by Proekt on Friday, 1 April. In the report, investigative journalists examine publicly available information about the doctors assigned to the 69-year-old head of state, many of whom have been visiting more frequently in recent years.

The outlet determined which doctors visited Putin at his residence in Sochi by checking hotel accommodation contracts published on the government’s procurement website showing visits to Sochi by medical specialists which coincided with Putin’s trips there.

The number of doctors permanently accompanying Putin appears to have grown from five in 2016 to nine in 2019. By this point, one of the most frequent medical visitors to the President was oncologist Evgeny Selivanov. According to data from Proekt’s report, this particular doctor has flown to visit Putin 35 times, and spent a total of 166 days with him.

The only two medical specialists who have spent more time with the president are otolarynologists – throat, ear and nose specialists – suggesting that he may be receiving treatment for a thyroid disease, most likely cancer.

Signs that Putin is increasingly concerned for his own health are also consistent with speculation that he is ill. Putin has allegedly taken to an unconventional remedy involving bathing in the extract of Altai deer antlers. Proekt cites an acquaintance of the president who confirms this, adding that a wider trend for unconventional medicines and methods of prolonging youth has sprung up within the country’s elite.

Putin appears to have been particularly solicitous for his health since September 2021, when he disappeared from public view for a month, even voting in a Duma election from his office. Since the start of the pandemic, the Russian president has held most of his meetings by video link rather than in-person, and the majority of his in-person visitors have reportedly been made to isolate for two weeks and submit a stool sample before seeing him.

The Kremlin has, however, repeatedly denied that Putin is ill. A spokesman said in 2020 that the President’s health was “excellent”.

US and Chinese slowdown will tip the world into recession, says IIF
3 days ago
NEO: Rising in the East, Setting in the West: Russia strengthens trade with Global East
4 days ago
Stagflation fears continue to rise
4 days ago
The economics of herding in Mongolia
6 days ago
EXPLAINER: how a price cap on Russian oil might work
6 days ago