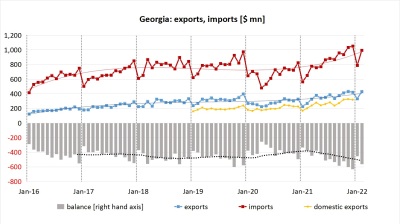 Georgia’s foreign trade deficit deepened by 48% y/y to $564mn in February, according to preliminary data released by the statistics office Geostat.

The 12-month rolling trade deficit widened by 33.7% y/y to $6.16bn as of February. Exports increased slightly faster than imports, by 35.5% y/y versus 34.9% y/y but this was not enough to even moderate the widening of the trade gap.

Georgia’s foreign trade will come again under pressure after the war in Ukraine emerged.

Last year, exports from Georgia to Russia increased by 38% and reached $610mn. As a result, Russia overtook Azerbaijan and became Georgia's second-largest export market – its share of total exports was 14.4%.

“The sanctions imposed in Russia have shown us once again that this market is unstable and we need to replace it,” said Ana Kvaratskhelia, Chairman of the Supervisory Board of the Export Development Association, quoted by Business Media.

Russia's influence on Georgia is greater than we can imagine, she added.

"Russia's influence on our economy is not fully accounted for. We only know what the Statistics Service tells us – these numbers are imports, exports, tourism and investment, but Russia has even more influence over Georgia, which is not seen on a daily basis," said Kvaratskhelia.