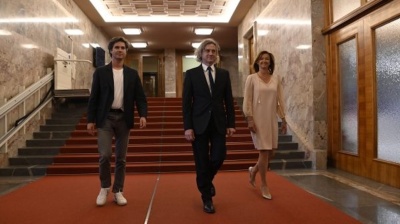 Robert Golob, leader of the green-left Freedom Movement, was elected Slovenia’s new prime minister by the National Assembly on May 25.

54 MPs backed Golob, a former energy executive, to lead the new government, with 30 voting against.

Golob’s Freedom Movement agreed to form a government with the Social Democrats (SD) and the Left after winning the April 25 general election.

He replaces Janez Jansa, a veteran politician who has served three times as prime minister and leader of the right-wing Slovenia Democratic Party (SDS).

Speaking to the parliament, Golob pledged to “give people hope for a better future”.

Among Golob’s priorities – as outlined earlier in the week – will be healthcare. Golob has already announced two measures: an exit strategy for coronavirus (COVID-19) and the preparation of an intervention law to lay the foundations for radical healthcare reforms from 2024 onwards.

At the parliament session on May 25, Golob also said his government will work with producers in an attempt to stabilise supplies and prices amid high food and energy price inflation.

“According to the preliminary coalition agreement, the new government will focus on the centre-left agenda, including more significant hikes to minimum wages and pensions as well as reforms in the areas of healthcare, pensions and labour market. In terms of taxes, the incoming coalition mulls the introduction of a new property tax, higher taxation on capital gains, and an increase in personal income tax. More generally, the new centre-left government would place more focus on the development of renewables and digitalisation,” wrote Teneo analysts in a note ahead of the vote on Golob’s appointment.

After the defeat of his SDS Party in the election, Jansa had tried to delay the formation of the new government by filing a motion to the parliament to call a referendum on the changes to the government act proposed by the new coalition. The SDS opposes the planned increase in the number of ministries by three to 19.

Golob had wanted to create a Ministry of Higher Education, Science and Innovation, the Ministry of Solidarity Future and the Ministry of Climate and Energy which, he said, would enable Slovenia to be resilient to future changes.