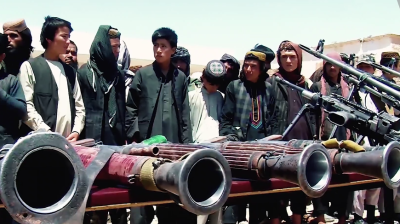 Islamic State fighters who surrendered to Afghan government forces in 2018 after having been defeated by the Taliban. / VoA, wiki, public domain.
By bne IntelIiNews April 21, 2022

Afghanistan’s Taliban regime has reportedly explained that a rocket attack on a military base in Uzbekistan was in fact launched by Islamic State Khorasan Province (ISKP) on April 18 from Afghan territory, but the rockets failed to cross the border.

AKIPRESS.com on April 21 reported Taliban-led government representative Enamulla Samangani as saying that the projectiles fell in the ruins of abandoned buildings within Afghanistan and that the location from where the rockets were fired was then identified. Three people with rockets were subsequently arrested, he was further quoted as saying.

After ISKP, a regional affiliate of Islamic State (ISIS) that is a sworn enemy of the Taliban, claimed it fired 10 rockets at a military base in the border town of Termez, Uzbekistan flat out denied that any attack took place.

Uzbek presidential press secretary Sherzod Asadov refuted claims that there had been any such incident, saying: “The information spread by some Telegram [social media] channels about alleged ISKP rocket fire from the territory of Afghanistan directed at the area of Termez is absolutely fake. According to the Ministry of Defence and the Border Troops of Uzbekistan, there is no military activity on the Uzbek-Afghan border, the situation is stable. We ask you not to succumb to provocations.”

The launching site for the rockets was claimed as in Hairatan, a border town in the northern Afghan province of Balkh. Individuals claiming to represent the terror group released a photo and video of the projectiles on social media to back the attack claims.

On April 5, the US Embassy in Tashkent said in a security alert that US citizens should take heed of a heightened threat from violent extremism for the next eight weeks in the vicinity of Uzbekistan's border with Afghanistan.

On March 7, bne IntelliNews reported a US think-tank as saying that sources close to military intelligence in a Central Asian nation had indicated that Central Asia, in particular Tajikistan and Kyrgyzstan, was set to be destabilised in the next four to six weeks with possible Taliban military moves and also the infiltration of ISIS and Al-Qaeda militants. Though the various Islamist terrorist groups in Afghanistan do not have common purpose—the ISIS and ISKP are foes of the Taliban, partly due to clashes over Salafism—the instability in Afghanistan has led to growing anxiety generally in nations bordering the crisis-stricken state since the US and allies exited the country in August last year, leading to a Taliban takeover and the declaration of the Islamic Emirate of Afghanistan.

Following that exit, bne IntelliNews ran a feature warning Central Asia and China could face a big upsurge in jihadist terrorism, with militants making their way from Syria to Afghanistan, amid the new Afghan reality.

ISKP has stepped up attacks around Afghanistan and in Pakistan since the departure of the US and allies after a two-decade military presence in the country. Uzbekistan in particular of the Central Asian nations has appealed to the major powers to do more to assist in helping Afghanistan's new administration build towards stability and economic development.