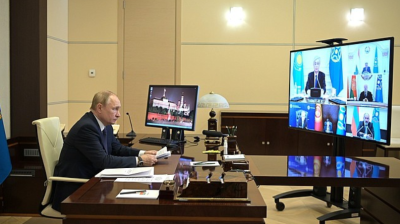 Putin attends an extraordinary virtual meeting of the Council of the Collective Security Treaty Organization (CSTO) via video link on January 10 with other CSTO member state leaders. / kremlin.ru
By bne IntelIiNews January 11, 2022

Russian President Vladimir Putin joined with Kazakh counterpart Kassym Jomart-Tokayev on January 10 in describing last week’s violent unrest in Kazakhstan as the work of foreign-backed terrorist groups who attempted an uprising and a coup.

Putin, who sent paratroopers to help Tokayev re-establish control of the country, declared that the Russian-led CSTO military alliance—grouping ex-Soviet states Russia, Belarus, Kazakhstan, Kyrgyzstan, Tajikistan and Armenia—would not allow its member governments to be toppled in ex-Soviet “colour revolutions”.

Addressing a virtual summit of the CSTO, Putin said: "Of course, we understand the events in Kazakhstan are not the first and far from the last attempt to interfere in the internal affairs of our states from the outside. The measures taken by the CSTO have clearly shown we will not allow the situation to be rocked at home."

By sending troops to Kazakhstan, the security bloc managed to help "prevent the undermining of the foundations of the state, the complete degradation of the internal situation in Kazakhstan, and block terrorists, criminals, looters and other criminal elements", Putin added.

Tokayev told the summit his country had overcome "an attempted coup d'etat" coordinated by what he called a “single centre”. He pointedly avoided addressing claims that palace intrigue might lie behind the disturbances, but he talked of the involvement of militants from neighbouring Central Asian countries, Afghanistan and the Middle East.

Around 8,000 people had so far been arrested in the subsequent crackdown, Kazakh officials said.

"Under the guise of spontaneous protests, a wave of unrest broke out," he said. "It became clear that the main goal was to undermine the constitutional order and to seize power."

Russia has long blamed the West for conspiring in bringing about so-called "colour revolutions". Such uprisings have previously toppled governments in countries including Georgia, Ukraine, Kyrgyzstan and Armenia.

"The main blow [struck by the plotters] was directed against [the city of] Almaty,” Tokayev said. “The fall of this city would have paved the way for a takeover of the densely populated south and then the whole country. Then they planned to seize the capital [Nur-Sultan]."

The unrest in Kazkahstan, in which at least 164 people are thought to have been killed, began as protests against a New Year's Day fuel price hike quickly spread into nationwide demonstrations against the government. On this point, Putin said: "The threat to Kazakhstan's statehood arose not because of spontaneous protests and rallies concerning fuel prices. It is because destructive internal and external forces took advantage of the situation."

Putin also said the events in Kazakhstan showed the dangers of social media and unrestricted internet use.

Neither Tokayev or Putin have presented compelling evidence of foreign orchestration or involvement in events, but the Kazakh foreign ministry said in a January 10 statement the attackers included "individuals who have military combat zone experience in the ranks of radical Islamist groups". It did not provide further details.

At one point, explaining why no evidence of a foreign terrorist connection had so far been presented, Tokayev said terrorists had attacked morgues and stolen the dead bodies of their comrades “in order to cover their tracks”.

He added that Kazakhstan would soon provide proof to the international community about what had happened.

Backing up Tokayev’s explanations for Kazakhstan’s week of carnage, Kazakhstan’s Secretary of State Yerlan Karin told state television on January 10: "I think there was some kind of a conspiracy involving domestic and certain foreign destructive forces."

TASS reported Kazakhstan’s National Security Committee as saying it had neutralised two extremist cells that had a hand in the nationwide riots.