Low base and pre-election handouts lift Hungary's GDP growth by 8.2% y/y in Q1 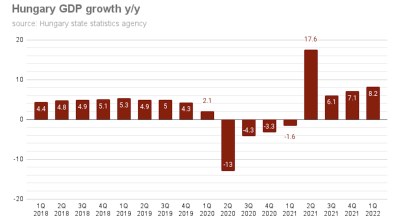 Hungary's GDP grew 8.2% y/y in the first quarter, spurred by carry-over effects, the strong performance of the retail and industrial sectors and the low base due to COVID-19 restrictions in March 2021, a preliminary reading by the Central Statistics Office (KSH) shows. The calendar-adjusted 8% growth and quarterly expansion of 2.1% also beat expectations.

Q1 GDP makes Hungary fifth in the EU ranking and well above the eurozone’s 0.3% y/y growth.

The short comment by KSH notes that practically all branches of the national economy contributed to the growth, but mainly industry and market services. Growth was significant in food and drink production, crude refining and electric equipment manufacturing, as well as in commerce, commercial accommodations, catering and logistics, it added. The detailed reading will be published on June 1.

Government measures have successfully cushioned the impact of the Russian-Ukrainian war, commented Finance Minister Mihaly Varga, who highlighted the above-average growth of the industrial, construction and financial sectors.

Analysts note that retail sales and services were lifted by the government's pre-election handouts, including the tax refund for families, and the payout of the 13th-month pensions,

The impact of sanctions on Russia, higher financing costs and lower purchasing power amid rising inflation are likely to dent growth in the coming quarters, they added.

Varga also stressed that the effects of the war and sanctions pose risk to the growth of the Hungarian economy. For the full year, the government expects 4.3% growth, above the 3.6% and 3.7% forecast by the EC and the IMF.

Hungary's economy is off to a strong start, but a bumpy road lies ahead, commented K&H senior analyst David Nemeth, putting growth at 4.8% in 2022. He said Q1 growth was driven by the low base, an increase in household consumption spurred by tax refunds and public sector bonuses, and inventory stockpiling.

The Hungarian economy has shown early resilience to the first wave of the shock of the war, but this pace of growth will be unsustainable, ING Bank analyst Peter Virovacz said. GDP growth could be just below 5% for the year if the economy were to stagnate during the coming quarters, he added.

ING sees the chances of a technical recession as rather moderate, but not negligible during Q2 and Q3.

Erste Bank head analyst Orsolya Nyeste said output data released earlier had pointed to the resilience of the industrial sector, in spite of supply chain interruptions, while higher wages and fiscal transfers boosted domestic consumption. The bank's growth forecast is 4.3%, but much depends on how long the war lasts and how quickly external demand can recover.

Magyar Bankholding remains the most bullish, with a 5.9% growth projection, saying economic growth will be lifted by consumer spending.

bneGREEN: Has green energy had its day?
US and Chinese slowdown will tip the world into recession, says IIF
Stagflation fears continue to rise