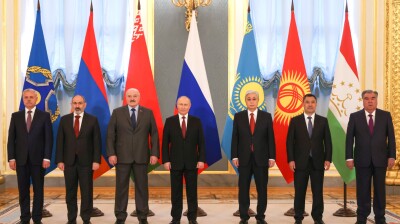 There must be some discomfort in the Kremlin that, apart from Belarus, members of the Russia-led defence bloc have not spoken up in support of the Russian invasion of Ukraine. Belarusian President Alexander Lukashenko indirectly addressed that sore spot on May 16 as, speaking at a summit of the leaders of the Russia-led Collective Security Treaty Organisation (CSTO) in Moscow, he urged all members of the military alliance to stand united.

Lukashenko said "hellish sanctions" against Belarus and Russia could have been avoided if the group had spoken with a united voice. Lukashenko’s remarks appeared to be especially directed at CSTO members like Kazakhstan, which have not openly backed Vladimir Putin’s military move to bring Ukraine to heel despite continuing to maintain close economic and political ties with Russia. During the violent civil unrest seen in Kazakhstan in January, the CSTO sent a “peacekeeping” force mainly made up of Russian troops to support current Kazakh President Kassym-Jomart Tokayev whom some analysts concluded was threatened by a potential coup.

"Without a united front, the collective West will build up pressure on the post-Soviet space," Lukashenko said in televised opening remarks, in which he addressed Russian president Putin along with the leaders of Armenia, Kazakhstan, Kyrgyzstan and Tajikistan.

He also accused the West of hoping to prolong the war in Ukraine in an effort to weaken Russia.

Also at the summit, Putin said the CSTO was planning a "series of joint exercises in Kazakhstan, Kyrgyzstan and Tajikistan in the autumn".

Putin also told the gathering that Moscow, during its invasion of Ukraine, had obtained "documentary evidence of components of biological weapons being essentially created" near Russia's borders.

"Possible methods and mechanisms of destabilising the epidemiological situation in post-Soviet space were being worked on," he claimed.

Armenia’s Prime Minister Nikol Pashinyan, meanwhile, accused fellow CSTO countries of disinterest in their obligations to each other. "Last year, these days, Azerbaijani troops invaded the sovereign territory of Armenia. Armenia turned to the CSTO with a request to launch the mechanisms provided for by the CSTO response procedure. Unfortunately, it cannot be said that the organisation reacted as Armenia expected," he said.

“In addition, we have long been raising the issue of the sale of weapons by the CSTO member states to countries unfriendly to Armenia. As a result, these weapons were used against Armenia and the Armenian people. This is also a problem. To be honest, the reaction of the CSTO member states during the 44-day war, after the war, did not inspire Armenia and the Armenian people. But I want to emphasise the special role of Russia and Russian President Putin in ending hostilities in Nagorno-Karabakh. Armenia continues to adhere to the tripartite statements of 9 November, 11 January and 26 November. Armenia is committed to the further development of the CSTO.

"We regard the organisation as a key factor in ensuring stability and security in the Eurasian region, and the security of Armenia. In general, we are positively disposed towards the full support of the organisation and its further development," Pashinyan added.