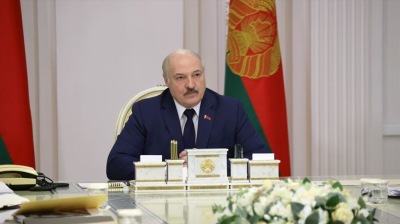 Belarus' President Alexander Lukashenko has threatened to shut down the key Yamal-Europe gas pipeline that transits gas from Russia to Poland, which would exacerbate Europe’s gas crisis if the EU follows through with a threat to impose a fifth round of sanctions.
By bne IntelliNews November 11, 2021

Belarus' President Alexander Lukashenko has threatened to cut off gas transit to Europe through his country by shutting down the Yamal-Europe pipeline if the EU imposes new sanctions on the country.

The Yamal-Europe pipeline is part of the northern route that also includes the Nord Stream 1 and 2 pipelines and transits gas from Russia’s Arctic Yamal fields via Belarus to Poland and on to Germany.

Currently the Yamal-Europe pipeline is playing a key role in delivering gas to alleviate the European gas crisis as the controversial Nord Stream 2 gas pipeline has not received EU permission to start operating and the Russian state-owned gas giant Gazprom is not sending any more gas than it is required to under the terms of a new transit deal signed in December 2019. Europe is already suffering from an estimated 15bn cubic metre (bcm) gas deficit for this winter’s heating season and any more interruptions in supplies would send prices on the gas spot market soaring again.

EU leaders met yesterday and floated the idea of imposing a fifth packet of sanctions on Belarus, which has been bussing thousands to Middle Eastern refugees to the Polish border, who are attempting to cross illegally into the EU. Blocked by some 15,000 Polish border guards and soldiers, the situation in the forest between the two countries is rapidly turning into a humanitarian crisis. The EU foreign ministers are due to meet next week and could vote on new retaliatory sanctions on Minsk.

"They have started to intimidate us with the fifth package [of sanctions]. With regard to this fifth package, the prime minister has been instructed to think of retaliatory measures,” Lukashenko said at a Council of Ministers meeting in Minsk, as cited by the state-owned BelTA news agency. “Poland is threatening us with the border closure. They are welcome to do it.”

Both Poland and Lithuania have declared a state of emergency this week and closed the border for a month while the refugee crisis continues.

Lukashenko went on to single out the Yamal-Europe pipeline for attention. The president noted that the gas pipeline goes through Belarus, and recently Russia has significantly increased the volume of gas transit to the West via the pipeline.

"We provide heat to Europe, and they are threatening us with the border closure. What if we block natural gas transit? Therefore I would recommend the leadership of Poland, Lithuanians and other brainless folk to think hard before opening [their mouths]. But it is up to them. They are welcome to close the border. The Ministry of Foreign Affairs should warn everyone in Europe that if they impose additional sanctions that are “indigestible” and “unacceptable” for us, we will hit back,” Lukashenko said.

Lukashenko has engineered the refugee crisis as a way of hitting back for the previous sanctions imposed on the country following the falsification of the presidential election results on August 9 last year that led to mass protests and again after Minsk used a MiG fighter jet to forces a commercial Ryanair flight to land in Minsk and arrested top opposition blogger Roman Protasevich and his girlfriend on May 23.

He is hoping to portray the EU as brutal and exercising double standards by refusing to let the refugees to cross the border, with some success, as Polish border guards have been spraying the migrants with pepper spray and there are reports of some migrants being beaten by the guards.

Human rights activists point out that under EU rules refugees should be accepted and then processed to see if their claim for asylum has merit. Poland and Lithuania have ignored these rules and simply refused entry, which has left some migrants trapped in no man’s land. So far, at least seven migrants have reportedly died trying to cross the border.

As part of the same propaganda campaign Lukashenko has called for more help to be given to the refugees that are huddled around campfires in the woods. Among other things, the head of state gave an instruction to provide the refugees with dry firewood.

“We need to pay attention to pregnant women and children,” Lukashenko said. “The situation is catastrophic. There are a lot of pregnant women who are due soon, a month or two. This is something we will have to deal with, as they will probably give birth here. They say they are not leaving the camp. But how's this going to be? Temperatures are falling. They do not know yet how cold it may be in Belarus, in the forests during winter. But they don't want to leave. So we have to be prepared.”

Lukashenko also downplayed the increasingly shrill reporting in the international press, which has taken up the story of the plight of the refuges and made it front-page news.

“You see what is happening on the state border and around it. I'll put it frankly: this problem is not as big as the media present it. But I don't blame the media. Because it has a strong preventive effect. They have zeroed in on Belarus. But there are three to five other routes like this in the world that are used by millions of those fleeing the war. But somehow the situation on Belarus' borders with Poland, Lithuania and Latvia became front-page news. The Belarusian-Ukrainian border is now also coming into focus. This also bothers me. Probably it bothers Russia too,” the president noted.

The president said that as of the morning on November 11 there were 1,790 people in the camp; 322 more are on the Polish side, whom the Poles tried to push back to Belarus at night. “It did not work. They do not want to leave. These 322 people are currently there. Never mind, they will sort it out there. But these 1,790 people, who are in the camp near Bruzgi, need to be provided with firewood,” the Belarusian leader added.

And in a final bizarre twist, Lukashenko said that he was “concerned about weapons and ammunition deliveries to the camp.”

"The matter concerns our military and the State Security Committee. Attempts are being made to deliver weapons, ammunition and explosives to people in the camp," Lukashenko noted.

According to him, "weapons deliveries have been going on for two days...Together with Russia, we are keeping an eye on the situation, I have discussed the issue with [Russian President Vladimir] Putin. Weapons are mostly coming from [Ukraine’s breakaway region of] Donbas. What are they meant for? There are plans to stage a provocation here, turn our border guards and service members against those from the other side," the Belarusian president noted.

The “enemy at the gate” leitmotiv has been a staple of Lukashenko bombast which he often uses to portray himself as the sole guarantor of peace, stability and prosperity in the country.

In the same vein Lukashenko added that it is necessary to “closely monitor the movement of Nato's and Poland's troops” on the border.

“It is being done. Nevertheless, the Defence Ministry, the KGB and the border guard should monitor the movement of troops of Nato and Poland. You see that there are 15,000 military personnel, tanks, armoured vehicles, helicopters and aircraft over there already. They've been deployed closer to our border. Impudently. Without warning anyone. Although they are supposed to warn us in line with the agreements.”

Lukashenko has warned of Nato troops massing on Belarus’ border many times since the mass protests broke out last summer and even put the military on full alert during the height of the protests last summer to try to distract attention from the crowds that took control of the streets of all of Belarus major towns. However, previously there were no large Nato troop movements. But this time by engineering the refugee crisis Lukashenko has succeeded in provoking Poland into sending a large body of soldiers to stand right on Belarus’ border, including helicopters and armoured personal carriers, which the Belarusian president is now milking for all its worth.