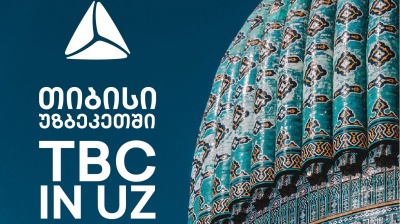 TBC was awarded an Uzbekistan banking licence in early 2020. / TBC.
By Muzaffar Ismailov in Tashkent May 10, 2022

“2021 marked a new chapter in TBC’s history as we successfully expanded our banking operations in Uzbekistan and took firm steps towards establishing ourselves as a digital innovator in the region. We believe our position as the leading bank in Georgia, coupled with our Uzbek business, will enable continued strong growth, while our digital business model will drive robust profitability going forward,” chairman of the board of directors of TBC, Arne Bergren, said in a statement.

TBC Bank's top manager, economist Vakhtang Butskhrikidze, highlighted the growth of TBC UZ, the investors in which include the European Bank for Reconstruction and Development (EBRD). By the end of 2021, it had 35 locations, along with 10 showrooms, with a total coverage of 97% of the population.

“Currently, we are only presented with the mobile banking app in Uzbekistan and we are planning to keep penetrating new markets with our technology only. International users are able to use the mobile banking app to save a deposit and receive loans and this is the model which we will continue to push,” Butskhrikidze lately told the Financial Times, noting that the technology “enables the bank to expand”.

The bank has added a number of services that are new to Uzbeks such as consumer loans without collateral, payment of bills and P2P transfers. Global Economics recently awarded TBC UZ the title of “Best Digital Bank of Uzbekistan in 2021".

Latest figures showed the TBC UZ app had 1.14mn registered users, of which almost 473,000 were added in the fourth quarter of last year. The number of active users in the country of 35mn was 141,000. The bank had issued 224,000 cards and 386,000 cards of other banks were linked through the application.

According to the strategic report, TBC UZ provided 12% of TBC Bank Group's revenue from commissions and fees.

TBC also noted the risk of negative impacts of the war in Ukraine on Uzbekistan’s economy. However, a fall-off in transfers of remittances from Uzbeks abroad has been partially offset by high revenue from Uzbekistan’s sales of raw materials, it said.

The arrival of a foreign digital bank in Uzbekistan spurred local companies to form operations that might compete. When TBC announced its plans for the country, there was nothing like a digital bank serving Uzbeks. By the time TBC UZ launched, several competitors were already waiting to do battle on the market, including Anorbank and Bank Apelsin.

Russian space chief Dmitri Rogozin has indicated that developers of a craft being designed for the pad will have to work around sanctions.

EWDN: How Russian game developers are being hit by the shockwave of war

Among many other competitors, it will take on BluTV, the market leader in Turkey’s subscription video-on-demand (SVOD) market with a 42% share.

First goal for Agriniser will be to expand its digital marketplace to buy and sell grain into Romania.

Serbian startups attracted over $135mn of investments in 2021 – more than six times as much as in the previous year.

Kazakhstan: Sanctions likely behind fresh delay at new Baikonur launchpad
7 days ago
EWDN: How Russian game developers are being hit by the shockwave of war
8 days ago
Disney+ comes online in Turkey
8 days ago
Romanian crowdfunding platform SeedBlink helps Bulgarian startup Agriniser raise funds
14 days ago
Investments into Serbian startups soared more than 600% in 2021
14 days ago