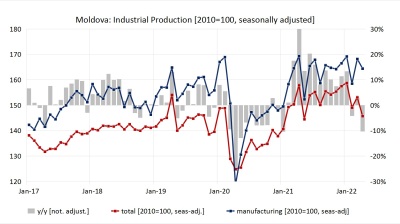 Moldova’s industrial production index posted a 10.3% y/y contraction in April, according to data released by the statistics bureau BNS.

The results for January-April remain positive and it remains to be seen whether the slowdown in April was prompted by the war in Ukraine and the impact on the region’s economies. Moldova's economy had already exceeded pre-crisis levels in 2021.

The manufacturing activity contracted by only 3.9% y/y in April, while the production and supply of utilities (electricity, natural gas) contracted by 49% y/y, detailed data show.

For the first four months of the year, however, the situation is not particularly dramatic, with a positive 0.2% advance of the overall industrial activity and 2.5% increase in the manufacturing sector.

The separate industrial sectors post, however, very diverging results: the manufacturing of rubber and plastic advanced by 21% y/y while the production of electric equipment contracted by 50% y/y in the first four months of the year.

Production of food advanced by 42.6% y/y, as the local industry is gradually substituting imported goods that are becoming more expensive.

Besides the production of beverages (+9.2% y/y) and wood processing (+31% y/y) and paper manufacturing (+18% y/y), there are several other industries posting positive performances for the first four months of the year.

The production of construction materials (+7.2% y/y0 and metallic constructions (+2.8%) are the most relevant.

Clothing production rose 11.1% in the first four months of the year compared to the same period in 2021 and the chemical industry’s output rose by 9.5% y/y.

Romania’s public debt hits 50% of GDP at end-May
7 hours ago
Hungary's automotive industry continues to rebound in June
1 day ago
Russian GDP contracted by 4% y/y in the second quarter of 2022
1 day ago
Serbia’s annual inflation accelerates further to 12.8% in July
1 day ago
Poland’s CPI growth rate picks up just 0.1pp to 15.6% y/y in July
3 days ago