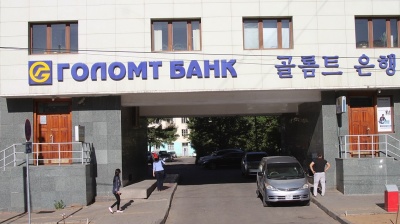 A branch of Golomt Bank in Ulaanbaatar. Mongolia's economy has started to feel the Ukraine crisis heat. / Juris Paiders, cc-by-sa 2.0.
By Anand Tumurtogoo in Ulaanbaatar March 23, 2022

The economic ramifications of Russia's invasion of Ukraine and the West's imposition of heavy sanctions on Moscow in response to it are starting to unsettle Mongolia.

Four days after Russia invaded Ukraine on February 24, the governor of the Bank of Mongolia (BoM), Lhagvasuren Byadran, told reporters that the national lender boasted $4.3bn in reserves as of the start of 2022, and that the reserves were more than enough to cover seven to eight months. Yet there have been instances of bank customers blocked from making foreign payments of more than Mongolian tughrik (MNT) 4mn (less than $1,700) and prevented from obtaining more than $1,000 per day.

BoM suggested that individuals banks may have set their own limits on the amount of dollars that can be withdrawn, taking account of their internal reserves.

Whatever the facts here, there is no doubt that the Ukraine crisis is putting Mongolia's economy to the test. Inflation has hovered around 13% since January and in February it topped 14%. The central bank said in early January that inflation would move down as soon as exports picked up again, but China’s strict “zero-covid” policy continues to make it difficult for Mongolia to ship minerals and coking coal to its giant neighbour, putting a big dent in the country's economic performance.

Since the start of the Ukraine war, the MNT has dramatically depreciated from 2,842 to the USD to 2,910. Given global price hikes, the central bank is now examining the next step it could take to ensure that the national currency does not depreciate further. It remains adamant that it does not want to deploy reserves to strengthen the tughrik. But the situation is worsening. Some FX outlets have stopped selling dollars or are selling for at least MNT 3,100.

There are also tales of people swapping huge sums of rubles for USD.

At a press conference called to address public anxiety over inflationary pressures, Lhagvasuren said: “Uncertainty has arisen in the economy. In 2021, the balance of payments showed a deficit of $220mn. This year we started out in the first month with a $500mn deficit. This was due to a growth of imports, post-Covid economic growth. And with this war it is certain that the balance of payments will be in deficit by the end of the year.”

After the conflict broke out, and Russia's ruble sank in the face of the sanctions response, some Mongolian economists called for the exchange of rubles to be stopped, but BoM did not issue an ordinance. The central bank, though, has made it clear that the exchange of rubles in the country has increased since the invasion. It said: "If we look at the average amount of ruble transactions from 2019 to the present, a maximum of $30mn in rubles has been used for payments and exchanges in the country [on a monthly basis]. A total of $92mn worth of ruble transactions were made from the beginning of this year till March 18. Also within this time, the amount of rubles purchased amounted to $4.2mn. This shows that the amount of rubles bought by banks on the domestic market is much lower than the amount sold."

To preserve the reserves, BoM is working on limitations—one restriction could see limits placed on the importing of luxury goods including cars—and will monitor certain transactions. “Only by supporting exports will we be able to have certain foreign exchange reserves. Steps need to be taken to bring mining products to the market. At today's auction, banks applied for $162mn, but we submitted $50mn,” the central bank noted on March 22.

Banks, the central bank said, used to send in information on FX payments once a month. “However,” Lhagvasuren added, “we now receive daily information on any transactions worth more than $50,000, to exercise control over the purposes for which [hard] currency is transacted to abroad. A contingency plan is required if the MNT continues to depreciate."

Lhagvasuren also suggested that for Mongolia to maintain steady economic progress, the government must postpone some of its objectives. “Some of the state budget investment needs to be postponed this year,” he said. “There is a need to reduce costs that can't be borne, [such as with] construction work that has not yet been commissioned.”

The economics of herding in Mongolia
bneGREEN: Is coal killing us all?
CEE companies weather the COVID-19 crisis