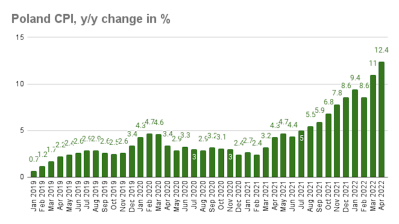 Inflation proved even stronger than GUS’s flash estimate, which put it at 12.3% y/y in late April. That will only affirm the National Bank of Poland and its governor Adam Glapinski – who just secured a second six-year term in office – in their stance that monetary tightening must continue.

The NBP has hiked its reference interest rate eight times between October and May from the all-time low of 0.1% – to which rates were slashed to ease going through the coronavirus pandemic – to 5.25%. The currently expected target interest rate is around 7%, analysts say.

Monetary tightening is expected to lead to a strong slowdown in economic growth later this year and in 2023, apparently the only plausible scenario in which inflation is contained.

At the moment, however, “demand-side inflation is gaining momentum,” Bank Millennium said in a comment on GUS figures.

“The price pressure is wide-ranging with companies being able to shift the rising costs of production onto retail prices. This clearly shows that inflation is demand-driven, supported by high economic growth, tight labor market and expansionary fiscal policy,” Bank Millennium added.

Prices in the transport segment led growth in April, expanding 21.1% y/y, GUS showed in the breakdown of the data. That included a jump of 27.8% y/y in the fuels segment.

Prices of food and non-alcoholic drinks increased 12.7% y/y in April.

The outlook for inflation assumes further growth in the next few months to 14%-15% – unless the prices of energy commodities spiral out of control due to the EU’s carrying on with an embargo on Russian oil and gas.

Inflation and the central bank's fight with it are also fast becoming a political problem for the government, as price growth is eating into Poles' incomes, while the NBP's monetary tightening has pushed up mortgage repayments significantly.

Poland buys 32 helicopters from Italian producer Leonardo
Polish CPI surges to 15.6% y/y in June
US and Chinese slowdown will tip the world into recession, says IIF

Conditions in the Czech manufacturing sector deteriorated in June for the first time since August 2020, with the index falling from 52.3 to 49.