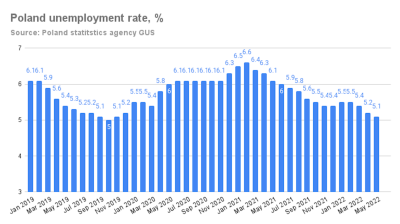 The GUS reading confirms an estimate by the Ministry of Family and Social Policy published earlier this month. The unemployment level is the joint-lowest since 1990 and indicates that the Polish economy is still going strong mid-way through the second quarter ahead of the expected slowdown in the second half of the year.

For now, however, demand for labour remains strong, pushing up wages and consumption – the latter also spurred by the influx of war refugees.

Also data from the corporate segment of labour market signalled cooling of economic growth ahead.

For several months in a row now, the lowest unemployment rate, 2.8%, has been in the Poznan province in the west. The province’s joblessness rate declined 0.9pp y/y.

The countrywide unemployment rate is expected to hover around 5% in 2022, with caveats linked to the impact of the war in Ukraine and to the central bank’s current tightening cycle.

The National Bank of Poland hiked its reference interest rate nine consecutive times between October and June from 0.1% to 6% to contain rampant inflation.

The monetary tightening is expected to cool Poland’s economic growth, which could lead to slightly higher unemployment rate at the end of 2022.

Russian inflation falls again to 14.9% in August, fears of a deflationary spiral grow
2 hours ago
FDI in Bosnia rose by 35% y/y in 2021
5 hours ago
Latvian unemployment rate at 6.6% in 2Q
1 day ago
Polish economy in much sharper downturn than expected, Q2 GDP data show
1 day ago
Russia’s EconMin seen as overly optimistic with another GDP upgrade
1 day ago