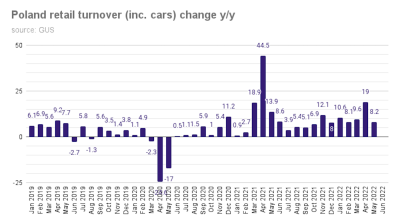 Polish retail sales grew 8.2% y/y at constant prices in May, the growth rate slowing down significantly from a gain of 19% y/y the preceding month, the statistics office GUS said on June 22.

The May reading, which came in at even below analysts’ quite conservative consensus of 8.8%, shows that consumption trends are normalising after disruption caused by the inflow of Ukrainian refugees and the low base effect from last year.

The impact of the arrival of more than 3mn refugees remains visible, as sales of food, medicines and cosmetics, as well as clothing and shoes all, expanded in double digits in May.

The following months will probably bring a further normalisation of sales results, a result of lower purchasing power of Polish consumers, offset to an extent by refugee spending, according to PKO BP.

“Consumer demand will be supported by the July cut in personal income tax rate and the likely continuation of solid nominal wage increases,” PKO BP noted.

But the harbingers of a slowdown in consumption rate are already visible in other sales segments, with just four out of eight main retail groups showing y/y turnover gains.

Car and car parts sales slid 10.6% y/y in the wake of manufacturers’ problems with supply chains.

Retail sales and other high-frequency data from the economy do not change the outlook for interest rates in Poland. The National Bank of Poland (NBP) is virtually certain to deliver yet another hike in July to raise the rate level to 6.5% at least.

More tightening is certain in the coming months, as inflation is expected to persist in double digits, peaking at 15% - 16% over the summer. The target level of interest rates is now seen at 7% - 8%, analysts say.

At the end of July 240,706 Czechs were seeking employment through Czech authorities, Czech Labour Office’s latest data show. This figure is 9,397 more people than previous month translating to a rise of 0.2% and 3.3% unemployment rate. (chart)

Both crops are in high demand given the disruption caused by the war in neighbouring Ukraine to international food markets.

High import prices of food and energy are now spilling over into the prices of other products and services.

BNR says it expects no further rise in inflation over the coming two quarters and is concerned about the economic stagnation in the second and third quarters of 2022.