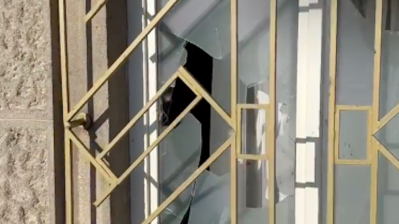 A protest in North Macedonia’s capital Skopje against the French proposal that would lift Bulgarian veto on the start of the country’s EU accession talks turned violent in the evening July 5, leaving dozens of police officers injured.

The violent protest was the last in a series of demonstrations against the proposal drafted by the French presidency of the EU. It is intended to unblock North Macedonia’s stalled EU accession process, but opposition parties and most of the public consider it is harmful for the Macedonian national interest.

47 police officers were injured, 11 of them seriously, while two officers with serious injuries were hospitalised at the Neurosurgery Clinic. 11 protestors were detained, two of whom were minors, the police said on July 6.

“The consequences of last night's rampage in front of the Assembly!” parliament speaker Talat Xhaferi said on July 6 in a Facebook post, where he posted a video clip showing broken windows, tiles and bottles on the floor of the parliament following the previous night’s protest.

“I recognise and support everyone's right to protest and express his opinion. But I constantly and strongly condemn hooliganism, violence, incitement of hatred, because these are not a solution,” Xhaferi commented.

There was also damage to the buildings of the government and the Ministry of Foreign Affairs where the protests were also held.

The Interior Minister Oliver Spasovski announced the harshest punishments for the organisers as well as students who participated in the violent protests against the French proposal.

“Last night we witnessed a dark event, which turned from a public gathering organised by the opposition parties into vandalism. Members of police were brutally attacked while on duty,” Spasovski said in the statement.

Spasovski added that during the evening protest, a significant damage was done, with damage to paving stones and road signs and benches torn out of the ground. Some protestors threw stones, eggs, Molotov cocktails, rubbish bins and fireworks at official buildings and the police officers who secured the state institutions.

Following the violent protests the police managed to disperse the protestors.

The French proposal has been sent to the parliament for consideration. The first discussions on the proposal are expected on July 6.