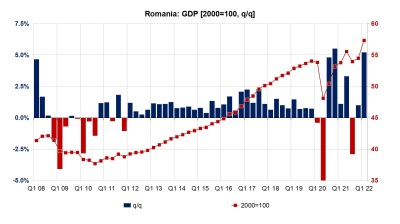 Romania’s GDP increased by a real 6.5% y/y in the first quarter of the year (Q1), according to the flash estimate published by the statistics office INS on May 17. The seasonally-adjusted quarterly GDP increased by 5.2% q/q compared to Q4, after a revised (from negative) 1.0% q/q advance posted in the last quarter of 2021.

INS’s flash estimate came as a surprise to independent analysts, who, based on the high energy prices and the effects of the war in Ukraine, included among their scenarios a technical recession episode in the first part of the year. Surprisingly, the energy prices may have actually been responsible for the stronger GDP in Q1: OMV Petrom, Romgaz, Nuclearelectrica and Hidroelectrica boasted record profits in the quarter and this counts as value-added. Certainly, this will surface as (and be offset by) subsequent losses (or smaller profits) for the energy consumers — but this may take a while to be counted.

Based on Q1 growth, the predictive model developed BCR bank indicates an annual economic growth of 5% for the entire year, the bank’s chief economist Ciprian Dascalu said. However, the multitude of one-off developments of an unusual magnitude (such as the rise of the energy prices or the lockdown in 2020) erodes the confidence level provided by such models developed for smoother changes in the variables.

The drivers of the Q1 growth remain unclear until INS publishes the first detailed set of data for the first quarter of the year.

The significant revision of the seasonally-adjusted GDP data comes as no surprise as the seasonal pattern has been altered over the past years by one-off events of a magnitude wider than the seasonal variations. For technical reasons, the seasonally adjusted data should be regarded with caution.