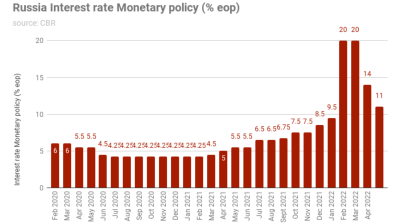 Russia’s CBR slashes key rate to 11% ahead of schedule as inflation falls, and to take upward pressure off the soaring ruble. / bne IntelliNews
By bne IntelliNews May 26, 2022

The Central Bank of Russia (CBR) held an unplanned ahead-of-schedule policy meeting on May 26, at which the board of the regulator slashed the key interest rate by 300 basis points (bp) from 14% to 11%.

“The Russian central bank’s (CBR’s) 300bp interest rate cut, to 11.00%, at today’s unscheduled Board meeting underscores that high oil and gas revenues and the rally in the ruble have given policymakers room to reverse emergency measures introduced since February," said William Jackson, Chief Emerging Markets Economist at Capital Economics in a note.

This made an aggressive cut exceeding the expectations of 200bp key rate reduction, and brings the total cuts to 900bp since the CBR jacked up the key interest rate to 20% in the emergency mode following Russia’s military invasion of Ukraine.

"The latest weekly data points to a significant slowdown in the current rate of price growth. The easing of inflationary pressures is supported by the dynamics of the ruble exchange rate along with a marked reduction in inflation expectations of households and businesses. The annual inflation rate in April reached 17.8%, but as of May 20 it slowed down to 17.5%, falling faster than the April forecast of the Central Bank of Russia," the CBR commented in a press release accompanying the key rate decision.

The CBR officials were previously telegraphing further easing of the emergency monetary policy mode. As followed by bne IntelliNews, the market expected a key rate cut as inflationary expectations of the population moderated and the ruble has over-appreciated under strict capital and currency controls to multi-year highs.

The cut is also designed to take some of the upward pressure off the ruble, which has appreciated to uncomfortable levels in recent weeks, breaking out below the RUB60 to the dollar level that will have a knock-on effect of reducing the government’s tax revenues in the midst of a war in Ukraine.

“The move was clearly motivated by the remarkable rally in the ruble, which broke through 60/$ earlier this week,” said Jackson. “That has helped to stabilise inflation – the latest weekly CPI figures show that consumer prices were broadly flat in week-on-week terms for the past two weeks. Inflation expectations have also fallen back.” The CBR said that the population’s inflation expectations have dropped to 11.9% this week, after falling 6pp in March to 12.5% – a very rapid fall after rising steadily in the last quarter of last year to worryingly high levels.

Previously the CBR already made a surprise key interest rate cut to 17% on April 8 after it soft-landed the Russian ruble to the levels at which it was trading before the military invasion of Ukraine. The CBR then cut the rate again to 14% during the planned meeting of April 29.

Notably, the CBR’s previous front-loaded rate cut of 300bp corresponded to the mortgage rate cut enacted by President Vladimir Putin at the same time, which shows closer co-operation between the Kremlin, the government and the CBR amid sanctions.

The regulator said that further key rate cuts are possible as soon as at the next scheduled meeting of June 10 and reiterated that it now expects to return to the 4% inflation target in 2024.

The CBR also commented on recent relaxing of strict currency and capital controls to ease the artificially over-appreciated ruble. The regulator wrote that “financial stability risks have eased somewhat, allowing certain capital controls to be relaxed" and that lending activity remains low amid inflow to ruble deposits.

The analysts surveyed by RBC business portal believe that the CBR could cut the key rate back into single-digit territory below 10% already in June. Stressing the risks to economic activity and growth in the statement also points to the CBR being concerned with challenges accompanying an over-appreciated ruble.

"The scale of the ruble's rise has apparently passed the threshold of the financial authorities," Dmitry Polevoy of Loko-Invest told RBC. Cutting the rate could channel ruble mass from deposits back into consumption and investment, increasing the demand for rubles, he suggests.

As analysed by bne IntelliNews, the ruble is trading at pre-invasion levels, which is of extreme importance, as the ruble to the US dollar remains the most closely watched economic indicator by ordinary Russians at home. On the outside, a stable ruble rate helps project invincibility amid Western sanctions.

But the strong ruble becomes a problem as the balance of payments gets bloated with hard currency cash that cannot be spent on imports or debt payments, the budget risks missing on revenue targets, and the economists warn of Russia catching the Dutch disease.

“We suspect that the CBR won’t continue this pace of easing (bear in mind that this was the second 300bp rate cut within the space of a month). Whereas the statement from the (schedule) Board meeting in late April said that the CBR “sees room” for rate cuts, the language in today’s statement was less definitive – the CBR now “holds open the prospect” for rate cuts,” Jackson said.

“Even so, the key point is that high oil and gas revenues are providing policymakers with a lifeline, allowing them to row back emergency economic measures. Against that backdrop, a further easing of capital controls and additional rate cuts seem likely. We’ve brought forward some of the cuts in our interest rate profile and now expect the one-week repo rate to end the year at 8.00% (previously 10.00%),” the analyst added.