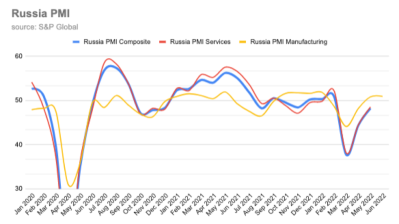 Russia's manufacturing PMI remains in the black at 50.9 in June (up from 50.8 in May) as the economy stabilises and demand remains high as firms scramble to replace missing Western products. / wiki
By bne IntelliNews July 1, 2022

The seasonally adjusted S&P Global Russia Manufacturing Purchasing Managers’ Index (PMI) was back in the black in June, posting 50.9, in line with 50.8 registered in May, as Russia’s economy stabilises after the initial shock of Western sanctions starts to wear off.

Any result above the no-change 50 represents an expansion in activity. The positive result signals “a slight upturn in the health of the Russian manufacturing sector midway through 2022,” S&P said in a note. The rate of expansion was also close to the long-run series average, the consultant added.

The positive manufacturing result comes on the back of the latest RosStat results that showed Russia’s economy was stable, but various sectors have been deeply wounded. Automotive production, for example, has completely collapsed with production down 97% in May. However, that was offset by growth in other sectors, mostly raw materials, and especially oil production, which returned to growth in May on the back of high global demand.

June’s PMI data signalled a marginal improvement in operating conditions across the Russian manufacturing sector, amid a return to growth in new orders, S&P said.

“Nonetheless, output continued to decline amid a further steep fall in exports and shortages of raw materials,” S&P said.

Inflation also remains a problem. The CBR doubled the prime rate to 20% only days after the invasion of Ukraine to head off inflation and instability in the exchange rate and the move seems to have been effective as the regular has cut rates four times since then to bring the rate back to the pre-war 9.5% on June 10 as inflation pressures rapidly eased. Analyst expect the CBR to continue to cut rates as the focus switches from containing inflation to promoting growth.

S&P reports its panellists are still seeing price rise pressures, due to input price rises stemmed from hikes in imported material costs, which have been affected by sanctions.

“That said, the rate of cost inflation eased to the slowest since February 2020, which fed through to the first fall in output charges since March 2017,” S&P added.

Inflation in May remains at a high 17.1%, putting pressure on the cost of living and leaving Russia with a deeply negative real interest rate, but economists believe it will keep falling in the coming months and the CBR is predicting inflation will return to its target rate of 4% by 2024.

Unemployment has been another bright spot, with RosStat reporting the official jobless rate has fallen to a post-Soviet low of 3.9% in May. However, analysts believe the low rate is artificial, as the state is preventing state-owned companies from sacking employees made idle by the sanction-related problems. Exiting foreign companies – around 200 foreign companies have either left the Russian market or suspended operations according to a study by Yale – have largely kept their local employees on the payroll for the meantime. Foreign-owned companies account for a total of about 10% of the Russian workforce. During the coronavirus (COVID-19) crisis unemployment rose to a peak of 8.1%, and unemployment is expected to rise to at least that level later in the year if state support is withdrawn.

In the meantime, S&P’s panellists report that employment was actually growing in June as firms stepped up their hiring activity to meeting new orders and domestic demand as imported goods disappeared from the shelves in a low-level import substitution drive.

“Longer-term, sentiment was also buoyed by greater new order inflows as business confidence ticked up to the highest since February,” S&P said. “Supporting the headline figure was a renewed rise in new orders received by Russian manufacturers during June. The increase in new sales was marginal overall but followed four successive monthly contractions. Where new order growth was noted, firms linked this to greater domestic demand and the agreement of new projects.”

An informal survey carried out by academic Maria Snegovaya of how sanctions have affected people’s everyday lives found that while the sanctions were noticeable, most ordinary Russian reports that their lives have not changed much.

“There are sharp regional disparities. Moscow and St. Pete are doing much better than the regions. This is reminiscent of Soviet times,” Snegovaya said in a social media post. “Both choice and quantity of goods are declining, substitution (if at all) mainly with lower quality products. Substituted either with lower-quality domestic or Chinese goods. Rising prices on almost everything. Plenty of closed stores. Worst situation is with car spare parts, imported appliances and clothes. Groceries are more or less OK, especially seasonal ones. However, the situation is not critical, many people in big cities do not even notice any change.”

Obviously exports have been one of the categories to be most affected by sanctions, S&P’s panellists confirmed, as export orders contracted further from the previous month. “The rate of decline was the slowest since February but remained steep, and was attributed to the impact of sanctions and the suspension of contracts with customers in Europe,” S&P said.

As bne IntelliNews reported in a recent blog, the West’s sanctions regime has significant leaks that have allowed Russia to continue to export significant amounts of oil in particular so that the state is currently running its largest current account surplus on record. However, sanctions have dramatically curtained imports, especially of spare parts and technology, so that “the only thing that Russia is importing at the moment is money”, many commentators on social media have quipped. That has caused the ruble to rise dramatically in value against the dollar, giving Russia a nasty dose of the Dutch Disease.

Output levels also decreased again in June. The pace of decline quickened from May and was solid overall, as firms stated that challenges sourcing raw materials due to shortages and higher imported input costs had hampered efforts to step up production.

Finally, output expectations regarding the year ahead across the Russian manufacturing sector remained upbeat in June. The degree of confidence was the strongest since February amid hopes of greater client demand and a stabilisation in economic conditions.

Home of the humbled lira, Turkey’s the biggest cryptocurrency market in the Middle East
CPI inflation in Moldova hits 33.6% y/y in July
Russian inflation falls to 15.1% in July

CPI inflation in Moldova hits 33.6% y/y in July
12 hours ago
How do high gas prices push up the cost of power?
20 hours ago
Russian inflation falls to 15.1% in July
20 hours ago
Russia’s current account surplus hits new all-time high of $166bn
1 day ago
Poll shows every other Russian supports continuing the war against Ukraine
1 day ago