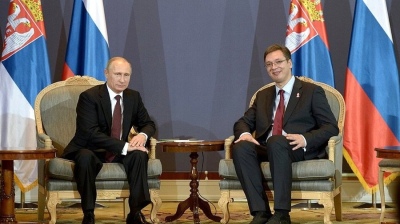 The latest poll from Demostat shows strong sentiment in Serbia against joining the European Union, with 51% of respondents saying they would vote against in a referendum on joining the bloc. At the same time, there is overwhelming support for Russia and opposition to joining Western sanctions.

The poll was carried out between June 13 and 22 — immediately before the June 23-24 EU summit at which member states gave little hope to Serbia and other candidate countries of a speedier accession process.

According to the poll, just 34% of respondents would vote for Serbia's entry into the EU, while 11% would not vote and a further 4% were undecided.

Moreover, the head of the Demostat research team, Srecko Mihailovic, said on presenting the research that it was not certain that the 34% who backed EU accession would actually vote in favour if they fully understood the concessions Belgrade would need to make in order to join.

The poll included a question on whether respondents would accept Serbia’s recognition of Kosovo as a condition for joining the EU, which had a strongly negative response.

“Considering that two thirds of the respondents think that Serbia should refuse to recognise Kosovo, and that only 17% of the respondents accept that recognition, it can be considered that the number of supporters of Serbia's entry into the European Union is actually 17%, said Mihailović.

Demostat programme director Zoran Panovic added that only 17% of respondents were aware of the political concessions that Serbia would need to make in order to enter the EU, including compromises on Kosovo.

Kosovo declared independence from Serbia in 2008, but Belgrade has never recognised it as an independent state.

Mihailović argued that attitudes towards the EU were influenced by the government and government-controlled media. “The confusion in that relationship with the EU, he says, was created with the intention and belief that it can be cleared up, if necessary,” he said.

This is despite Serbians recognising the EU as the largest donor and investor to their country.

“The citizens of Serbia see the European Union as the biggest investor and donor, but they are emotionally more attached to Russia,” Demostat’s presentation said.

The poll also reveals very strong sympathy towards Russia despite the invasion of Ukraine in February.

80% of respondents oppose sanctions on Russia, while only 9% are in favour. 81% believe that Serbia should preserve its neutrality at all costs.

66% of respondents said Nato was responsible for the war in Ukraine, and only 11% blamed Russia.

Russian President Vladimir Putin was the most popular world leader, picked by 45% of respondents, with 12% choosing Chinese President Xi Jinping and 11% Emanuel Macron.

President Aleksandar Vucic remains the most trusted politician within Serbia.

"We need to understand the connection because Vucic built his cult of personality by constantly calling on Putin," Panovic commented.