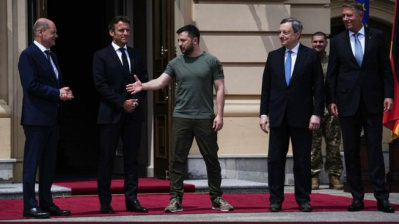 Leaders of Germany, France, Romania and Italy announced their support for Ukraine’s European Union candidate status, but with qualifications, at a major meeting in Kyiv on June 16.

Speaking alongside Ukrainian President Volodymyr Zeleskiy, the four states, who have been criticised for their perceived lack of support for Ukraine, all back Ukraine’s "immediate" EU candidate status ahead of a European Council meeting next week.

German Chancellor Olaf Scholz, who has frustrated Kyiv due to the lack of heavy weapon supplies from his country, said that “Ukraine belongs to the European family” and promised that Germany will “support Ukraine in its sovereignty and territorial integrity” both from a “financial point of view and humanitarian point of view”.

“Germany will vote in favour of this positive step for Ukraine, and the same goes for Moldova,” Scholz announced. However, he said that both countries will need to meet the criteria before ascension.

"The Ukrainian people defend every day the values of democracy and freedom that underpin the European project, our project," he adds. "We cannot delay this process”, the BBC reported.

However, he also emphasised that dialogue needs to remain and that "any diplomatic solution cannot be separated from the will of Kyiv".

This was backed by French President Emmanuel Macron, who highlighted the importance of keeping communications open with Russian President Vladimir Putin.

“All four of us in France, Germany, Italy and Romania support the status of immediate candidacy for membership. This status will be accompanied by a roadmap and will also imply that the situation in the Western Balkans and that neighbourhood, particularly of Moldova, is considered,” Macron told Zelenskiy.

According to Deputy Minister of Defence of Ukraine Anna Malyar, Western allies have only provided 10% of Kyiv’s requested weapons. She claims Ukraine uses 5,000-6,000 artillery shells a day, whilst Russia uses ten times that.

In response, France will send six more long-range Caesar guns, in addition to the 12 it has already committed. Germany also pledged to support Ukraine’s military as long as it needs and will give anti-aerial systems and provide training for Ukrainian troops.

Zelenskiy announced that Russia’s attack on Ukraine is an attack on Europe and thanked the leaders for their support. He said that Ukraine is “ready to work” to become an EU member.

"Ukrainians have already earned the right to go down this road and obtain this candidate status,” Zelenskiy said, according to the BBC.

Whether or not Ukraine will become a full member of the EU soon is still up in the air and Kyiv may spend a long time stuck in the waiting room. Scholz still seems on the fence about allowing Ukraine to join the Union.

Nevertheless, this is still a step forward in Ukraine’s relationship with the EU. The country will need help from the Bloc to rebuild after the war and part of the recovery roadmap includes full access to the EU’s structural funds and markets to help manufacturers integrate into global retail chains and increase exports.

Ukraine has, however, received undying support from Poland.

“Today, Ukraine needs our signal: the opening of European doors for Ukraine as a state, for Ukrainian society that wants to be part of the European community, not Russia’s sphere of influence,” Polish President Andrzej Duda said last month. “Countries striving for the European Union should receive a clear signal that the doors to the EU are open”.

One of Ukraine’s major stumbling blocks towards its path to EU accession is its rampant corruption, having fallen five positions in the global Corruption Perception Index for 2021, Transparency International reported on January 25. Ukraine ranks 122 out of 180 countries.

Transnistria restates its commitment to independence, merger with Russia