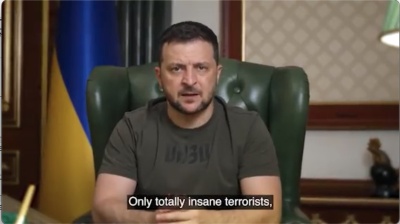 Russia launched a missile attack on a shopping mall in central Ukraine, killing dozens of innocent civilians. Ukrainian President Volodymyr Zelenskiy called on the US to recognise Russia as a state sponsor of terrorism.
By bne IntelliNews June 28, 2022

Following a horrific Russian missile attack on a packed shopping mall in Ukraine's industrial city of Kremenchuk, Ukrainian President Volodymyr Zelenskiy has called on the West to designate Russia a state sponsor of terror in his daily video address to the people.

Russia has repeatedly been accused of war crimes, especially after the massacre in the Kyiv suburb of Bucha in April, but the attack on a packed shopping mall at the weekend takes Russian atrocities to a new level, Zelenskiy said. Ukrainian authorities confirmed there are no military targets in the vicinity and the strike was designed purely to inflict terror on Ukraine’s civilian population.

“Today’s attack on the shopping mall in Kremenchuk is one of the most defiant terrorist attacks in European history. A peaceful shopping mall with women, children, ordinary citizens inside,” Zelenskiy said. “Only insane terrorists, who should have no place on earth, can strike missiles at such an object.”

The president went on to emphasise that the strike was a deliberate targeting of civilians and said that he had appealed to the US to classify Russia a state sponsor of terrorism.

“Russia will stop at nothing. This morning I called on the State Department of America to recognise Russia as a state that sponsors terrorism. The relevant resolution is approved by the US Senate Committee, and the legal decision can be adopted by the Department of State. Such a decision is clearly needed, and it must be supported by the entire democratic world.”

At least a dozen people were killed, and more than three dozen injured after Russian missiles slammed into a packed supermarket in the middle of the day on June 27.

Zelenskiy tweeted that there were more than 1,000 people shopping in the mall when Russian missiles struck the building, setting it on fire and causing the roof to collapse on customers still trapped inside.

Emergency services were quickly on the scene and attempted to pull survivors from the rubble in an ongoing operation. More bodies are expected to be discovered as the work progresses today.

ASH: The West is short-changing Ukraine
COMMENT: Can Russia pivot its European gas sales to Asia?
Missiles or sabotage: What caused the explosion at the Russian airbase in Crimea?