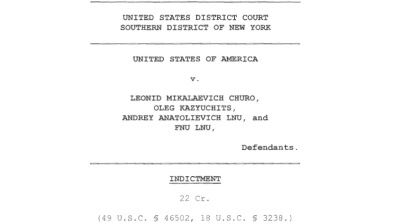 A picture of the official indicment. / Picture from www.justice.gov
By bne IntelliNews January 23, 2022

Two of the Belarusian officials are director-general Leonid Mikalaevich Churo and deputy director Oleg Kazynuchits of Belarus’ state air navigation authority Belaeronavigatsia. The other two are officers from Belarus state security service Andrey Anatolievich Lnu and Fnu Lnu. All four are charged with engineering the diversion of Ryanair Flight 4978, with the purpose of arresting Belarusian journalist and political activist Raman Pratasevich and his girlfriend Sofia Sapega.

According to a statement made by the US Department of Justice the case was investigated by the FBI; New York Police Department (NYPD); the National Transportation Safety Board; the Justice Department’s National Security Division Counterterrorism Section and Criminal Division’s Human Rights and Special Prosecutions Section, and the Office of International Affairs. Help was also received from Poland’s Internal Security Agency and the Mazowieckie Regional Prosecutor’s Office; and Lithuanian authorities provided valuable assistance with this investigation.

Conspiring to commit aircraft piracy carries a minimum sentence of 20 years and a maximum sentence of life in prison. However, the statement of the Department of Justice underlined that “An indictment is merely an allegation, and all defendants are presumed innocent until proven guilty beyond a reasonable doubt in a court of law”

Belarusian journalist Roman Protasevich and his Russian girlfriend, Sofia Sapega, were detained in May 2021 when Belarus scrambled a military jet to escort their Athens-to-Vilnius Ryanair flight to land in Minsk. Many countries condemned the action ordered by Belarusian strongman Alexander Lukashenko as a "state hijacking" of a passenger aircraft; this also prompted harsh sanctions from Western countries.

Bne IntelliNews previously reported the UN’s civil aviation agency’s (ICAO) report concerning the incident, which was released on Monday. The report was critical of the Belarusian authorities' actions during the incident and also complained about Belarus’ authorities providing unsatisfactory evidence to the ICAO's investigational team.

Both Belarus’ President Alexander Lukashenko and Belarus’ Director of the Aviation Department of the Belarusian Transport and Communications Ministry Artyom Sikorsky have said that the report proves Belarus’ innocence. However, Sikorsky told Belarusian state media that some facts in the report had not been presented “quite correctly”. He continued saying “We expect that ICAO will consider Belarus’ complaint against the illegal actions of several European countries that had imposed sanctions against the civil aviation of our country.”