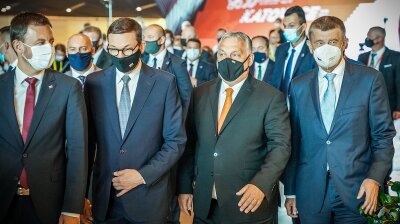 The Visegrad Group (V4) of four Central European countries is in “deep freeze” because of the Hungarian-Polish split over the Ukraine war, and it will have to be re-invented after the end of the conflict, Professor Jacques Rupnik, the leading French political scientist on the region, told an Aspen Institute France webcast on April 28.

Rupnik recalled how the V4 had been established in 1991 by Czechoslovak President Vaclav Havel – to whom he was an adviser – Polish President Lech Walesa and Hungarian President Arpad Goncz in order to pursue integration of the former Communist countries into the European Union and Nato. The three original members subsequently became four following the 1993 'Velvet divorce' of Czechoslovakia.

However, he said over the past few years the V4 had been in “reverse mode” under Hungarian Prime Minister Viktor Orban, Polish deputy premier Jaroslaw Kaczynski, as well as Czech former premier Andrej Babis and former Slovak premier Robert Fico.

“In recent years the Visegrad Group has acquired the reputation – sometimes exaggerated, sometimes deserved – of a grouping that is resisting further EU integration,” he said, pointing to the way the V4 had obstructed attempts to share the burden of the Syrian refugee crisis in 2015.

“There was the feeling that Central Europe – under Orban and Kaczynski, but also to a lesser extent under Babis and Fico, with their ‘populism light’ – was a brake on EU integration: exactly the opposite of [the V4's] original purpose,” he said.

In 2016 Orban and Kaczynski had proclaimed they were engaging in a “counter-revolution” against Brussels, to resist what they saw as the European Commission’s violation of their countries’ sovereignty and its attempt to impose Western liberal values in gender and minority issues. The two strongmen also defended each other against EU attacks on their erosion of democracy and violation of the rule of law.

But this year the close bond between the two leaders has broken down over the way Orban has opposed tougher sanctions on the Kremlin and has refused to donate arms to Ukraine.

Kaczynski said this month that if Orban “cannot see what happened in Bucha, he must be advised to see an eye doctor”.

“We cannot co-operate as we did in the past if this continues,” he said. The relationship could improve, he said, “but only if Viktor Orban changes”.

Rupnik said the breakdown of this relationship had also blocked their plan to build a new radical right-wing grouping to take over the European Parliament.

He pointed out that the Hungarian-Polish bond was now being replaced by a closer Czech-Polish bond between Polish premier Mateus Morawiecki and new Czech Prime Minister Petr Fiala.

“The Visegrad Group will have to reinvent itself after the war,” Rupnik concluded.

Orban is now increasingly seen as isolated in the EU. There is speculation that this could soon deepen, particularly if Brussels and Poland are able to reach a compromise over the government’s judicial reforms that would allow the Commission to release its frozen Recovery Funds, and if Orban vetoes the EU's imposition of sanctions on Russian oil.

However, in response to a question by bne IntelliNews, Rupnik said that Orban and Kaczynski still had a common interest in preventing the use of the EU’s Article 7 against either country. Under Article 7 the European Council can suspend a country’s voting rights, though this requires unanimity of all the other member states.

“Neither Poland nor Hungary – nor the Czech Republic nor Slovakia – will accept Article 7, not because they necessarily agree with everything Orban or Poland do, but there is an appreciation that if the EU uses it today against Orban they will use it tomorrow against me,” Rupnik said.

He predicted that after the end of the Ukraine conflict there will be a renewed fight over the use of the European Commission’s new conditionality mechanism, which it can use to freeze funding in the case of violations of the rule of law. The Commission has already triggered it against Hungary for its failure to control corruption in its public procurement.