ISTANBUL BLOG: How far could some Kurd killing go to saving Erdogan’s skin? 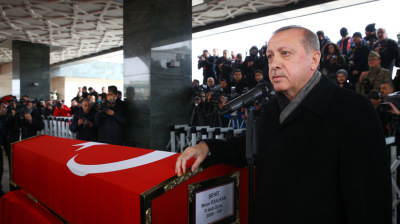 Erdogan seen with his arm on the coffin of a “martyr” while talking about main opposition party CHP.
By Akin Nazli in Belgrade October 8, 2019

Throughout his 17-year-long rule, Turkish strongman Recep Tayyip Erdogan has used Turkey’s conflict with the Kurds as an invaluable nationalist tool in firming and sustaining his hold on power.

Now—with Turkey possibly poised to invade northeast Syria where its forces may clash with Kurdish militia left without US protection following October 6’s apparently spontaneous decision by Donald Trump—many Turks are wondering whether the latest situation with the Kurds is being used to distract the electorate from a grim economic situation that has already caused Erdogan’s party to lose Istanbul, Ankara and other cities at the polls.

Erdogan actually attracted Kurdish and pacifist votes until 2011 by pledging that he would not systematically kill Kurds the way the military tutelary regime—ended by Erdogan and his then-ally-now-enemy Fethullah Gulen with the 2010 constitutional amendment referendum—had done to enable oppressive rule of the country under the domination of unelected officers of the armed forces. But by the end of 2011, Erdogan, latching on to the easiest way for any Turkish government to consolidate its power, declared war on the Kurdistan Workers’ Party (PKK) in order to hide his backdoor war in Syria. However, he had to re-launch the so-called peace process with the Kurds at the end of 2012 after he didn’t manage to overthrow the Assad regime, something he’d expected to do within a short time.

The June elections in 2015, when Erdogan’s Justice and Development Party (AKP), lost its parliamentary majority, subsequently proved a dramatic breaking point. Since then, allied with Turkey’s ultra-nationalist National Movement Party (MHP), Erdogan has fought wars and entered into fraught disputes against whomever he could find—the PKK, Islamic State, Gulenists, the US, Berlin, the Dutch, the Greek Cypriots over offshore gas resources, shadowy global economic forces he’s accused of conspiring to undermine Turkey’s economy, and so on.

But, yes, it’s the economy stupid and, for some, mass purges that have demonstrated an abhorrent lack of regard for basic human rights, and the March 31 local elections—as well as the Istanbul revote on June 23 called after Erdogan and his henchmen refused to accept their loss at the ballot box of the cultural and commercial capital, but resulting in a disaster for Turkey’s leader as his man went down to an even more resounding defeat—showed that Erdogan has nothing to offer when his credit-fuelled economy comes off the rails and he’s unable to souse the country with dollars.

One thing’s for sure, if the Turkish army suffers fatalities from its latest push into Syria, Erdogan will receive the coffins of Turkish “martyrs” and he will attempt to ignite dynamite under the opposition alliance by accusing the main opposition Republican Peoples’ Party (CHP) of partnering with Kurds through the pro-Kurdish People’s Democratic Party (HDP). He’ll then go on to pump up national unity propaganda as he bids to silence any kind of opposition voices still heard challenging his government (not to mention the growing number of dissenters in his own party that would like to see the back of Erdogan).

But has Erdogan bitten off more than he can chew by trusting the October 6 phone call with the nothing-if-not-unpredictable US president that finally gave him the green light to go after the Kurds in northeastern Syria that he has been after for such a long time?

Complications have set in, not least because Trump, perhaps troubled by the level of opposition among Republicans to stabbing the Kurds in the back, or perhaps having blundered in giving Erdogan such a carte blanche to do his worst, subsequently came out and warned his Turkish counterpart that if he does anything “that I, in my great and unmatched wisdom, consider to be off limits, I will totally destroy and obliterate the Economy of Turkey”.  Can Erdogan delimit the boundaries of Trump’s wisdom? Does he know for sure how far he can go? Not very likely.

Responsibility for IS prisoners

Another difficulty is that while commentators may have marvelled at Erdogan’s ability to bring Trump round to his way of thinking over the phone (this is not the first time he’s persuaded Trump they’re on the same page), the Turkish president appears to have promised the Commander-in-Chief that, as part of its operation, Turkey will take over responsibility for the tens of thousands of Islamic State prisoners in the Syrian region.

Did Trump realise that these prisoners are not even in US custody—as Brett McGurk, former US special presidential envoy for the coalition against Islamic State pointed out, while ruing Trump’s "complete lack of understanding of anything happening on the ground",  they are being held by the Kurdish-led Syrian Democratic Forces (SDF) “which Trump just served up to Turkey”. Well, whatever the level of understanding, should a good many of these prisoners escape during any jockeying, carnage or confusion to follow, Trump—so proud of the crushing of Islamic State “by the US” in Syria which frankly was a victory won by the Kurds whom he doesn’t deem worth a mention—will look like one almighty oaf and Erdogan won’t look too clever.

Not to be overlooked in this moving target of a story is how Erdogan has cooked up a scheme to take towards 30 billion dollars from Europe and other donors to finance a massive house-building bonanza on seized Syrian territory, largely for Syrian refugees who could move back to their homeland from Turkey. Such largesse will have the eyes of Turkey’s bankrupted contractors—the construction industry has taken a walloping amid Turkey’s economic downfall—popping. Shares in Turkish construction companies have been on the up since Erdogan’s tanks got permission from the White House to roll.

Erdogan’s political standing looks more precarious than ever. A “glorious” military adventure followed by post-war reconstruction profits to buoy the economy could go a long way to righting fortunes. Just how troubled Erdogan is by the extent of his unpopularity was demonstrated again at the weekend at an AKP party camp where he remarked that disloyal officials could be found throughout the party’s ranks.

Last week, an AKP official spun the idea of lowering the threshold for a candidate to be elected president in the first round of voting from the current 50%-plus-one-vote to 40%-plus-one-vote. Secretly prompting a selected AKP official to test the waters for possible plans is a trademark device used by Erdogan.

When it became clear that no-one could find any logic in the 40%-plus-one idea, Erdogan harshly condemned it at the party camp. A pity, genuine AKP loyalists might think, because there is plenty of speculation doing the rounds that suggest the AKP-MHP alliance is scoring well below 50% in the opinion polls right now.