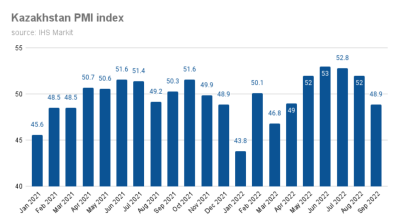 The index posted 48.9 in September, following August's 52. The survey noted that new orders fell for the first time in five months amid pressures caused by steep prices and ongoing supply-chain disruptions, which observers often link to effects of the war in Ukraine. As new business fell, firms scaled back production, purchasing activity and employment, with business confidence in decline. Currency weakness also contributed to sharp increases in input costs.

Anuar Ushbayev, managing partner and chief investment officer at Tengri Partners, said: "The period of growth seen in Kazakhstan's manufacturing sector in recent months came to an abrupt halt in September as signs of weakening demand meant that firms found it more difficult to overcome the severe headwinds they have faced for some time now.”

"Cost inflation accelerated over the month, while the disruption to logistics and trade routes caused by the war in Ukraine and sanctions on Russia continued to hamper firms' efforts to source materials,” Ushbayev added.

"With no signs that these headwinds are going to alleviate any time soon, business confidence fell as manufacturers prepare for a tough end to the year," he said.

Growth was marked by new orders expanding amid some signs of growth slowing, while production was broadly unchanged.

The headline Kazakhstan Manufacturing PMI is a composite single-figure measure of manufacturing performance. Any figure below 50.0 represents a deterioration.