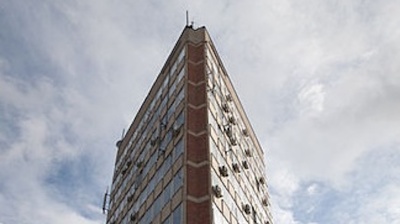 The central post and telecom building in Pristina.
By Valentina Dimitrievska in Skopje October 29, 2019

Kosovo Telecom, the largest telecoms company in the country, is facing bankruptcy as it is unable to repay its debt to the Kosovo Tax Administration (TAK), local media reported on October 29.

Kosovo Telecom has been struggling to find a solution to its difficult financial situation for months after the government said it won’t repay the company’s debt.

"All bank accounts of Telekom Kosovo have been blocked due to the company debts to TAK as of October 29," info-ks.net reported citing the statement given by Kosovo Telecom’s CEO Bedri Istrefi to KTV Kohavision.

Istrefi was cited as saying that the company management asked TAK to allow the debt to be paid in instalments within 11 months, but the proposal has not been approved.

"Failure to find a solution with TAK threatens not only the payment of salaries to employees, but also puts the company at the risk of bankruptcy," he said.

The Kosovan government decided in January to re-launch the procedure for the privatisation of Kosovo Telecom. Previously the authorities canceled the sale of the telco, formerly known as Post and Telecommunications of Kosovo (PTK), in 2013 after failing to win parliamentary support for the deal.

Shortly afterwards, the Kosovan telecoms ministry revealed that four companies — A1 Telekom  Austria, Orange, Rockaway Capital of PFF Group and Artillery One — were interested in acquiring the company.

However, government officials warned back in May that the company was at risk of bankruptcy, citing “harmful contracts” it had signed.

As well as the outstanding debt to the tax office, company also has a €25mn debt to local virtual mobile operator Z-Mobile, but company officials said they will negotiate to find a solution.

Kosova Telecom decided on July 30 to terminate the 10-year contract with Z-Mobile, since the latter had not accepted its terms for the new contract. This followed a strike by Kosovo Telecom employees, who said the previous one contract had been extremely harmful.

The deal with Z-Mobile had been harshly criticised, as it allowed Z-Mobile to compete with Kosovo Telecom’s mobile unit, Vala, while using Telecom’s own system.

However, Z-Mobile accused Telecom of trying to take over Z-Mobile’s clients and around 300,000 mobile numbers by terminating the contract.

Z-Mobile, owned by the Devolli Company, won a court case against Telecom, which was ordered to pay Z-Mobile €26mn for breaching terms of contract. However the enforcement procedures were delayed because of hopes that a new contract favourable for Z-Mobile would be reached.

In August it was reported that Z-Mobile will continue its legal battle to obtain the money owed by Kosovo Telecom after the contract between the two companies that was intended to settle the debt dispute was not renewed.

Z-Mobile argued that renewing the contract was in the interest of Kosovo Telecom, but that in a situation where there was a lack of co-operation it had little choice but to pursue legal remedies, without precluding the arbitration proceedings against Telecom.