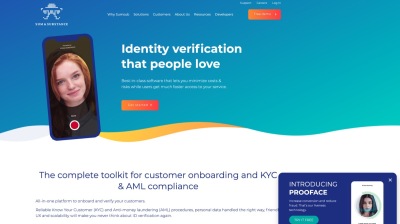 Sumsub, an identity verification start-up with Russian roots, announced in the first week of September the completion of a $6mn round of fund-raising, reports East-West Digital News (EWDN).

This Series A was led by MetaQuotes, a Russian-rooted financial trading software company, with participation from Telegram VP Ilia Perekopsky and unnamed existing investors.

Founded in 2015 by Peter, Andrey and Yakov Sever and Vladislav Zholudev, Sumsub is headquartered in London with offices in St. Petersburg, Berlin, Nicosia and Hong Kong.

In 2017 it raised funding from United Capital Partners and Flint Capital. As reported by Rusven, the latter sold its stake earlier this year to an undisclosed “major IT holding.” Sumsub claims it serves more than 600 clients – including BlaBlaCar, Gett, Paysend and Uber – with a capacity to verify 6,500 distinct types of documents.

It has designed “76 specific solutions” to meet local regulators’ requirements and cover nearly 200 countries in total. Even documents with local Asian languages – Korean, Japanese, Chinese – are handled, which Sumsub claims to have been the first to do.

The latest funding will allow the company to intensify its product development plans and expand into new markets, aiming to serve 1,000 new SME and enterprise customers by the end of next year.

Avast established its Romanian headquarters in the eastern city of Iasi, a popular destination for international tech companies.

Chinese telecoms giant urges Tallinn to reconsider draft regulation that would prevent it from working with local telecoms operators.