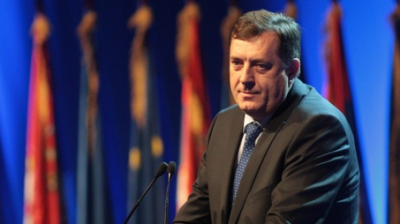 Dozens of MEPs have sent an open letter to European Commission President Ursula von der Leyen, urging her to launch an investigation into European Commissioner for Enlargement Oliver Varhelyi. They accuse Varhelyi of supporting ‘separatist activities’ on the part of the Serb member of Bosnia & Herzegovina’s tripartite presidency, Milorad Dodik.

Dodik has been strongly criticised by the international community as he continues to make moves towards the secession of Bosnia’s Serb entity Republika Srpska that risk leading to the breakup of Bosnia, or potentially another armed conflict.

The letter was released a month after the parliament of Republika Srpska backed a non-binding decision to withdraw from the armed forces, the judiciary and the state tax system, and three days after Bosnian Serbs, including Dodik, celebrated Republic Day, a controversial public holiday banned by the Bosnian Constitutional Court several years ago.

The letter, posted by Hungarian MEP Katalin Cseh on her Twitter feed on January 12, also refers to a published document signed by the head of the European Delegation to Bosnia, Johann Sattler, which, the letter says, states that Varhelyi is openly negotiating with Dodik to break up Bosnia.

“As a neutral party with considerable influence, the Commission has a key role in ensuring that the consolations of the Dayton Agreement are respected on both sides and a peaceful co-existence of separate entities conducive to development and growth is established in BiH,” the letter said.

“Not all EU member states share these goals, however. It is widely reported that the current Hungarian government is actively supporting Mr Dodik’s campaign to pursue his political strategy in dividing BiH, as evidenced by a recent €100mn support from Hungary to RS, just before the upcoming Bosnian general elections.”

It went on to add: “Even more disturbingly, however, a leaked document signed by Johann Sattler, the Head of the Delegation of the European Union to Bosnia and Herzegovina, suggests the EU Commissioner for Neighbourhood and Enlargement Oliver Varhelyi openly colluded with Milorad Dodik in potentially breaking up BiH. The report notes that Commissioner Varhelyi “agreed” with Mr Dodik regarding the date of a special session of RS’s National Assembly and that a 6-month moratorium to pass legislation on the unilateral withdrawal from state institutions would be announced.”

“With MEP colleagues, we call for an investigation into Commissioner Varhelyi’s alleged role assisting Milorad Dodik’s separatist escalation in Bosnia-Herzegovina,” Cseh tweeted when posting the letter.

“The EU needs to stand firmly and credibly on the side of peace. People in BiH and beyond deserve clarity on this.”

Tamás Deutsch, an MEP from Hungary’s ruling Fidesz party, denied the reports and said they should be ignored, according to reports in the Hungarian media. He added that both Varhelyi and the EU delegation to Bosnia have also denied the claims set out in the letter, and accused left-wing Hungarian politicians – Cseh is a member of the opposition Momentum – of spreading fake news and smears as Hungary’s April general election approaches.

EU officials warned about the potential for conflict in Bosnia in statements issued after the Republic Day celebrations.

“The EU firmly condemns the negative, divisive and inflammatory rhetoric used by Republika Srpska (RS) leaders during the celebrations of 9th of January this Sunday. Such rhetoric and actions have further heightened the tensions among communities throughout the country and are further escalating the ongoing political crisis. They jeopardise the stability and prosperity of the country, and are in complete contradiction with its EU perspective, which can only be based on a single, united and sovereign Bosnia and Herzegovina,” said a statement from a European External Action Service (EEAS) spokesperson on January 10.

A US State Department spokesperson called on January 11 for an investigation into the Republic Day celebrations. The event took place a few days after the US imposed additional sanctions on Dodik.

Low base and pre-election handouts lift Hungary's GDP growth by 8.2% y/y in Q1

Belarus expands its use of the death penalty
14 hours ago
The Mariupol siege is over as the last Azov defenders surrender
1 day ago
Kyrgyzstan: Eccentric health minister fights for his job amid claims of corruption and bullying
1 day ago
Azov commanders have remained behind in the Mariupol steelworks to continue the fight
1 day ago
Russia hopes Chinese carmakers will help revive Moskvitch brand
1 day ago