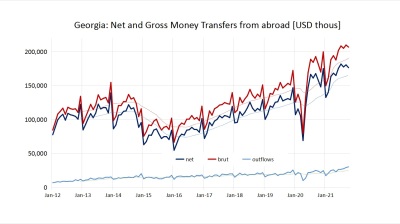 The money transferred to Georgian households through channels such as Western Union or Zolotaia Korona increased by 26% y/y to $1.91bn (over 10% of GDP) in January-October, the National bank of Georgia announced.

These wage remittances sent by Georgians living and working abroad have significantly contributed to the resilient domestic demand that propped up economic growth but also consumer prices this year and in 2020. Compared to the first 10 months of 2019, before the crisis, gross transfers to Georgian households surged by 36%.

In October alone, the gross and net transfers to Georgian households slowed to an annual growth rate of only 13.7% y/y (to $207mn) and 11.7% y/y (to $176mn) respectively. Compared to the pre-crisis period, in October 2019, the transfers were, however, roughly 35% larger in both gross and net terms.