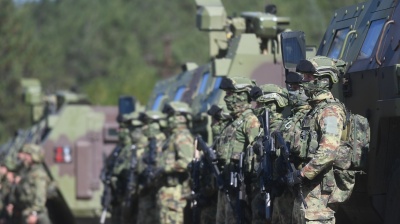 Serbian troops near the Jarinje border crossing.
By Valentina Dimitrievska in Skopje September 27, 2021

The Nato-led peacekeeping mission in Kosovo, KFOR, increased its presence on the Kosovo-Serbia border on September 27 amid tensions caused by Pristina’s decision to force Serbian cars to replace their license plates with temporary ones to enter Kosovo.

This led to protests by ethnic Serbs in northern Kosovo, where relations between Serbs and Kosovans are now at their lowest point in the last decade.

Serbs have been blocking the roads to the Jarinje and Brnjak border crossings to Serbia since September 20. Since then the situation has steadily escalated. According to media reports, several hundred Serbs are stationed at Jarinje border crossing in protest against Pristina’s decision on car plates.

Special units of the Kosovo police have also been positioned at the two border crossings for eight days.

KFOR has increased its routine patrols across Kosovo. KFOR helicopters have been flying over the administrative crossings at Jarinje and Brnjak, as well as other parts of northern Kosovo, populated mainly by ethnic Serbs, Serbian broadcaster RTS reported.

“KFOR remains focused on the implementation of its mandate under 1999 UN Security Council Resolution 1244 to ensure a safe environment and freedom of movement for all communities in Kosovo and has increased the number and duration of routine patrols throughout Kosovo, including in the north,” KFOR said in a tweet.

Serbian armed forces have been put on higher alert near the border with Kosovo and several Serbian army jets flew over the two administrative crossings on several occasions.

On September 26, Serbian President Aleksandar Vucic told TV Pink that he had told Nato secretary general Jens Stoltenberg that Serbian forces would not enter Kosovo to avoid further escalation of the situation there, Tanjug reported.

However, Vucic warned that Serbia will wait just 24 hours for Nato to react if there is a pogrom against Serbs.

"If the pogrom of our population continues, Serbia will react and will not allow that to happen," Vucic said.

"It's vital both Belgrade and Pristina show restraint and return to dialogue," Stoltenberg said on September 26.

EU and US officials have also stepped up their diplomatic efforts to calm the situation.

The US embassy in Belgrade said on September 27 that the US and Canadian defence attache offices visited the Jarinje and Brnjak crossings points to gain a better understanding of the situation.

“They were glad to note KFOR was on site as a stabilising factor,” the embassy said.

European Commission President Ursula von der Leyen is to visit Kosovo on September 29 as part of her Western Balkan tour, which will be focused on the latest developments in northern Kosovo.

US Deputy Assistant Secretary of State Gabriel Escobar is going to visit Brussels next week to discuss the situation in Kosovo with EU officials.

Albanian Prime Minister Edi Rama arrived in Kosovo on September 27 to meet his Kosovan peer Albin Kurti and opposition party leaders due to the escalation of the situation with Serbia.

Albanian Daily News cited Rama as saying that Albania is supporting Kosovo in the latest rift with Serbia, underlining that Pristina has the right to impose reciprocity measures with license plates.

He also condemned Serbia for conducting military manoeuvres at the border and asked Belgrade to finally recognise Kosovo.

“One of the priorities of Albania as a member of the UN Security Council will be to promote the recognition of Kosovo by all,” Rama was cited as saying.

European Commission spokesman Peter Stano announced that the chief negotiators from Belgrade and Pristina, Petar Petkovic and Besnik Bislimi, respectively would meet in Brussels on September 29.

This would be the "first positive step" in resolving the current situation in Kosovo, according to Stano.

Kosovo unilaterally declared independence from Serbia in 2008, but it is still not recognised by Belgrade as a separate state. Both are engaged in EU-mediated talks on the normalisation of their relations, but no major progress has been achieved so far.  The talks stalled again due to the latest incident.

Albania to raise up to €700mn with new eurobond issue