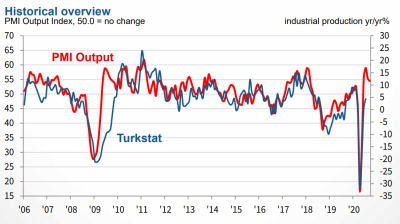 The headline purchasing managers’ index for Turkish manufacturing for September signalled a sustained improvement in business conditions, but also evidenced signs of rates of improvement in demand losing strength, survey compiler IHS Markit and the Istanbul Chamber of Industry said on October 1.

Andrew Harker, economics director at IHS Markit, said: “The key highlight from the latest PMI survey was strengthening job creation. A sustained period of improving demand means that manufacturers are willing to invest in rebuilding workforces following the COVID-19 downturn.

“That said, rates of expansion in new orders and output have levelled off and the threat of the pandemic remains. Firms will be hoping that trends remain positive over the final quarter of the year to keep the recovery going.”

Liam Peach at Capital Economics said: “Turkey’s PMI fell for a second month in a row from 54.3 in August to 52.8 in September. That said, the PMI remains high by past standards and points to industrial production accelerating from +4.4% y/y in July to 10% y/y in September.

“There was another sharp increase in the input and output prices balances to two-year highs, probably reflecting the further depreciation in the lira. The central bank is likely to tighten monetary conditions further, which will take some of the heat out of the recovery.”

IHS Markit said some firms indicated that a weaker currency had aided their competitiveness in export markets.

“Stocks of purchases ticked down, however, amid reports of continuing caution around stockbuilding and the use of inputs to support output growth,” it added.

The government debt to GDP ratio for Estonia was 18.5% at the end of 2Q20, which was the lowest among the EU’s member states.

Strong rebound for the sector in Q3 was followed by hike in new COVID-19 cases and tightening of containment measures.

Latvia's population decreased by 7,100 as a result of natural population change in January-September, to an estimated 1,898,000 as of October 1.

Poland’s CPI picks up to 3.2% y/y in September as COVID-19 restrictions drive up cost of services

More expensive services resulted from companies transferring costs of heightened sanitary standards onto consumers, as well as an outflow of foreign workers.